You know how sometimes I get distracted by going down worm holes looking for images to match my title? Well, happened again today. I thought I would be a great idea to have a small bottle of ketchup  to go with the title. Then I went the “catsup” vs. “ketchup” route. There is a great deal of energy surrounding that controversy. I decided to stay clear of it an use a photo with both spelling…I think it’s funny, all on its own. Anyway – wanted to do a bit a “ketchup” today, but only regarding the farm. If you want to delve into the difference between “ketchup” and “catsup”… here’s a great article for you.

As we get more and more into the winter season, egg numbers become less and less. Today I picked up 1 (one) egg from the RCW chickens; 21 hens, 1 egg. Those are not the best numbers – let me tell you.  It’s also a bit odd that we have so many chickens molting right now, you would think they’d pick a warmer time of the year to get rid of all their feathers all at once. There are feathers EVERYWHERE, let me tell you. Our most dramatic molter has always been Imen. She looks a bit like a zombie chicken at the moment. The photo here is from a few days ago, today she looks even worse… all the feathers that were on her head are completely gone, replaced by pinfeathers, but she still looks awful. You can see that the chicken behind her is also molting, but not nearly as bad. I’m just hoping that all her new feathers come in before we have another cold snap, or she’ll be freezing.

The newest littles are getting big fast. Remember, these are the Cuckoo Morans and they are all hens.  There is a red cast to this photo because we still have them under lights in the evening. They are fully feathered now, though, so we’ll begin weening them from the light over the next week. They will eventually be moved to the bottom brooder, and given access to the outside next week. The next batch of layers will be coming in two weeks. That will give us 40+ new layers in the spring. The newest batch will be Austra Whites. Sue had to order them from Meyer Hatchery because Murray McMurray was all out of chickens! Here’s what the Meyer Hatchery website says about these chickens: Austra Whites are a cross between a Black Australorp rooster and a

White Leghorn hen. This cross produces a white bird with black flecks. Being a first generation cross, legs can be either yellow or gray. Austra Whites retain the foraging and excellent laying capabilities of the Leghorns while being a little heavier and friendly like the Australorp. These fast maturing birds are prolific layers of white or cream colored eggs. Hens have been known to lay as early as 12 weeks and you can expect 4 to 5 eggs per week. They are an excellent hybrid breed for those that want lots of eggs from calm and nice hens. They sound like they’ll do really well – Sue decided to get them because of all the reasons above, plus they do well in the heat. We have more problems, it seems, with heat rather than cold.

In other news… those dang squirrels are making me angry!!! I am documenting the destruction completely, so that you can see my wrath is righteous! Here are the accusations and then the photo proof. 1) They ate my holiday pepper bush, and all it’s peppers, down to two short stems and a few leaves. 2) They ate my cinderella pumpkin’s insides. 3) They have burrowed under the bulbs exposing their roots and otherwise undermining the Saint Francis garden area – rather ironic, that. Grrrr. Think I’ll relocate them into town. —- ok, that was mean. 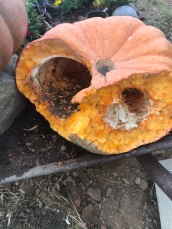 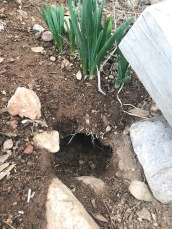 Did you enjoy the ketchup? Hope so. We’ll be checking in with you Tuesday – until then, as always~
Thanks for reading!

2 thoughts on “catch up”