Even though it was 76° when I came home today, we are in the midst of winter and the late nights and early mornings can still be quite frigid.  Sue told me that, when she went to feed the goats this morning, the whole back pastures were frosted over… that makes for a cold night!  The chicken-littles are still in the Chickshaw right now, that means that its mostly an open coop~ certainly open on the bottom ~we did staple wind barriers on the open sides because there were some ridiculously cold and gusty winds.  We think we lost one chicken due to exposure and we had to bring in one of the littler Buff Orpingtons who was having some difficulty eating due to the cold – we think.  So, we decided to take some winter feeding steps to make sure that none of the others had undue cold stress symptoms. Now, every night before it’s time to go in for the night, we create a FEEDING FRENZY by making up a hot chicken mash for them.  They completely devour the mash. What you can’t see is the black feed dish in the midst of that scrum of chickens.  Eating the warm mash helps to warm them up, fill up their crops for overnight digestion, giving them lots of fuel to keep their body temps up over night.  Then, we do it again in the morning when they get let out… giving them a boost for the cold mornings.  We’re hoping that the coop will be completed tomorrow and that we can work on moving the littles in over the weekend.  Stay tuned for that big adventure!
Until then,
as always,
Thanks for reading!

Today’s weather: Warm and beautiful!  The high according to the phone was 64° today!  But as stated earlier, it showed warmer than that on our indoor/outdoor thermometer at home.  Tomorrow the weather is supposed to be the same, nice and warm and sunny.  Sue reported that the wind in the morning was quite biting – otherwise it was a nice day.

Egg Report: 2 eggs today, we’ve been averaging 2 eggs every other day, on the “other” days we usually pick up 4.  I’m going to try to keep track of that, either here or on our FB Page… more for my information that yours, but I like sharing 🙂  Tootles.

Short post today, it’s been a long day for both Sue and I; actually, Sue is playing for the Vesper Service right now at church, so the day isn’t over quite yet for her.  I’m playing hooky because of my very early morning work day tomorrow.  Anyway… one of the neat things I like about this new venture is being able to grow some of our own vegetables and lots of fresh herbs! Sue’s not quite as ecstatic about it as I am, so I try to sneak vegetables in things all the time.  The photo on the right is our first small harvest of kale greens from the garden.  I love them when they’re just new like that, they’re so tender and sweet.  I chopped these up and added them to rice that I was steaming.  It looks pretty too, and Sue will eat her greens that way!  I’ll also add them to soups and stews that I make, especially if I’m going to be using the immersion blender to make a creamed soup.  She never knows! Well, that’s not really true.   But it tastes good!

Other things we still have growing in the garden are cabbages, spinach, and broccoli. Surprisingly, my cilantro is still doing really well, even though we’ve had some very, very cold days.  I’ve given my tender herbs like that their own little greenhouses and I think it’s helped quite a bit.  The one thing that did not survive was the dill.  The grasshoppers ate it down to nothing in one day.  ONE DAY!  Have to rethink that one; it might be an “on the porch herb” once we have it screened in.

Sorry this is so short and sweet. Maybe the next one will be better.
As always,
Thanks for reading!

Today’s Weather: I was inside at work all day, but Sue said it was a lot warmer.  According to the Weather on my phone, the high was 59° under an overcast sky, and it’s supposed to get down to 30° sometime tonight. Tomorrow it’s supposed to be sunny  but the high is predicted to be only 48°. We’ll see…..

Sue has been so busy lately; she’s following in the footsteps of Leonardo Da Vinci and building Gabion Walls!  What are those, you ask? Well… (this is from Wikipedia) A gabion (from Italian gabbione meaning “big cage”; from Italian gabbia and Latin cavea meaning “cage”) is a cage, cylinder, or box filled with rocks, concrete, or sometimes sand and soil for use in civil engineering, road building, military applications and landscaping. For erosion control, caged riprap is used. For dams or in foundation construction, cylindrical metal structures are used. In a military context, earth- or sand-filled gabions are used to protect sappers, infantry, and artillerymen from enemy fire. Leonardo da Vinci designed a type of gabion called a Corbeille Leonard (“Leonard[o] basket”) for the foundations of the San Marco Castle in Milan.   We’re simply using them for hard-scape and, to a small extent, to help direct or block wind around the house. END_OF_DOCUMENT_TOKEN_TO_BE_REPLACED

We have the best friends and neighbors! When people hear what we’re working on, or stop by and say, “What are you doing with that field?” and they find out we need something they have, they just say “Come get this, we don’t need it.”  Or “Whenever we have some, we’ll drop it off.” It’s so great!  It’s also been happening with people we’ve hired to do some type of work around the place.  For instance: Sue had a plumber come out to fix and old faucet that was just continually running out by the dinky house, he saw that she was working on some rock walls and he gave her some pointers and offered to give her some materials that he wasn’t going to be using… she stopped by to pick them up and got some more info, the materials that he had, and a huge box of iris that they were cleaning out! Never say no to “free”!  This photo is of some windows 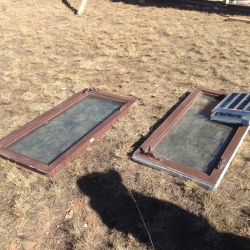 that our contractor friend, Brent, dropped by a few weeks ago… they came out of house that he was doing some remodeling on… now one will be a part of the new chicken coop, and the other will be part of the green house.  The doors for the goat shed and the pump house were dropped off too!  Remember all that stuff going into the ditch for our Hugelkultur area?  Much of that was donated by our neighbor, Tom, who has a landscaping business.  He’s also dropping off cuttings for our berm project in the upper field.  The people who put in the new flooring in the house had a truckload of pallets for us, we used them to make the compost bins!
I struck up a conversation with a gentleman I was sitting next to at “Messiah” rehearsal and found out that he has a small horse ranch.  I asked, “What are you doing with the poop?”  He did look at me a little funny, but when I explained that we’re trying to work with it for a type of compost planting, he was more than happy to let us come and get it.  So, now Sue is going every few days and picking up a truckload at a time to complete the penultimate layer for the Hugelkultur project.  All you need to do is tell people what you’ve got going on, more than likely they’ll be able to help or tell you of someone who might be able to help!  It’s just amazing! Yesterday a lady stopped by the property with her two sons and asked if we were going to sell… of course we said no, but when she asked what we were planning to do, and Sue started to explain, she said that she had a friend who owned a ranch called “The Can Do Ranch” and they would be happy to offload some horse hooey.  You never know where you might find someone to offer something that you need!  That’s right neighborly of ’em!

Today’s weather… was absolutely beautiful!  It was in the low 30’s around 6:30 this morning, but when the sun got up over the eastern mountains, it warmed up to a wonderful day.  Tomorrow, it should be clear and up into the mid 60’s.  Saturday morning we woke up to snow on the mountains above us. We had rain, but it didn’t even frost at our place.  Just had the pretty white dusting around 5000′.  This photo is a little small, but you can kind of just see it there on the mountain tops.  It’s really been beautiful!