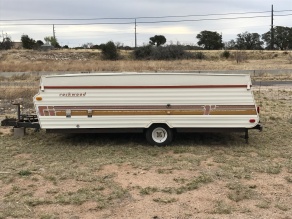 There are just so many!  Where do we start? Well – do you remember a post where I encouraged you to “never say ‘no’ to free”?  We’ve done that again, or not done that again, whichever is correct there.  Our contractor friend Brent had a tent trailer that he was going to refurbish, but decided that it would take too much work and time and money to get it to the point of usability again; he asked us if we were interested in it.  Sue jumped on that opportunity. She’s been looking for a trailer frame/body to use as a large, movable Chicken Tractor out in the further pastures. We need something that’s relatively heavy so it doesn’t blow away, like so many others – and it needs to be movable, something we can hook up to the tractor and just take around to where we’d like the chickens to be working. This tent trailer will be great. We’ll end up gutting it, but there are so many  usable items in there that we can re-purpose.  We might be able to use the sink in our outdoor kitchen area (it’s just a little bit smaller than we were hoping for), and there’s a table that would be good to use outside as well. There isn’t a stove or fridge, but other parts will probably 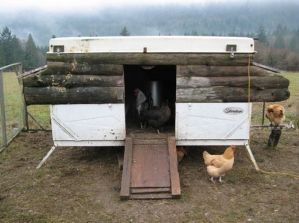 find good homes!  Dustin has already claimed the bed mattresses for use in the dinky house, as their blow-up mattress was punctured by their kitty – oops!  There are many design options for this new  chicken tractor, quite a few plans on line, so we’ll just have to see what will work best for us and the chickens. Take the photo just above; I am NOT saying that this is what we’ll be doing, just that it is an option. Kinda cute though – trailer chickens. This is definitely something to be working on in the near future.

Another project that is in the offing is- covering the ground with goodness! One of the more difficult things we’re wrestling with, in terms of the land and planting, is the condition of the soil.  Due to the wind issues (what? we have wind issues?), what we’ve found is that anything natural that falls to the ground: leaves, grasses, straw, twigs, bark – things that would normally help to amend the soil by decomposing – are just completely blown away. What we’ve been left with, in so many areas, is hard packed, sandy, pebbly, rocky soil that doesn’t really have anything left in it that would nourish the plants.  We’re even hard pressed to find worms! So one of the  projects we’ll be doing is to cover the ground in the areas we’re hoping to cultivate, with wood chips, compost, fertilizer, mulch, any or all of these.  We’ll start close to the house and work our way outward.  Sue started in on this today, since it will take so much materials, she moved two truckloads of, mostly, composted horse manure from our friends Peter and Laurie K., and neighbors Mr. and Mrs. Z. She started where the now completed Gabion walls run on one side of the house. This will finish composting in no time and will help to make this soil so much more plant-able in the future.  The little cordoned off areas are where she recently planted her peonies.  They’re supposed to be flush with the top of the soil, so she didn’t want to cover them with the manure.  They will reap the benefits just the same.

This photo relates the to final project I’d like to write about today. Yes, it is true that we are beginning to receive many eggs a day from the chickens, it is our hope to begin selling them quite soon, and these are mostly egg cartons that you’re seeing; however, the project has nothing to do with eggs. We’re talkin’ seeds!  It’s time to being germinating some seeds to plant out in a few weeks.  This is my project for the week, if I can actually get to it.  So, today I rounded up all the wayward cartons and containers we’ve been saving for this purpose.  We’ve done a seed inventory and I worked out the timelines and their needs for successful growing.  By the end of the weekend I hope to have most everything started and some even in the ground.  This is an experiment this year because we are not sure how things will do through the monsoon season.  This will be a continual subject for update in the blog and on Facebook.

Maybe we’ll even be able to include an update on some of these projects in Friday’s post. Until then~ as always,
Thanks for reading!

Today’s Weather: Yesterday (Tuesday) was absolutely beautiful! There was relatively no wind, and the high was around 73°! The predicted high for today was 81° and we actually reached that, according to my car’s thermometer.  Low tonight is only supposed to be 48°; spring may have sprung!

Egg Report: Yesterday we had only four, kind of let down after the 7 egg day, but I’m sure they needed to recuperate after that! Today we had 4 possibly 5. We scared one of the sisters in the nesting box, so she’s back in there right now and we may find another one (possibly two) when we shut them in tonight.  Things will continue to pick up as the days stay warmer and begin to get even longer.