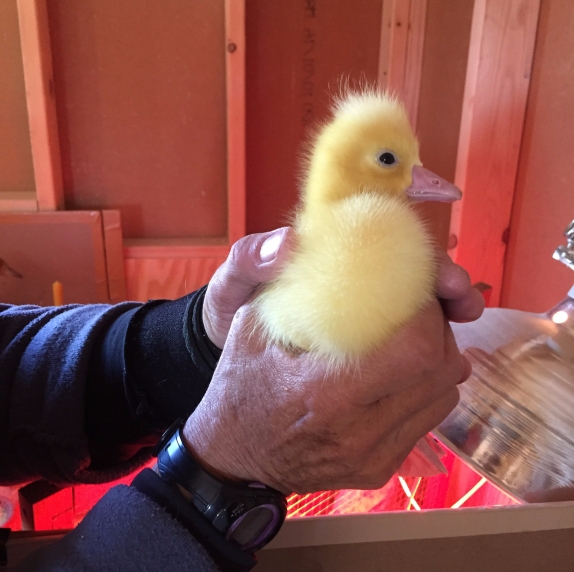 This little cutie is our newest family member; a gosling! Specifically a Tufted Roman (also called simply “Roman Goose”).  We don’t know if it is a girl or a boy, but we’re calling it Roman for now. According to The Livestock Conservancy, Tufted Romans are on the critical list.  We wanted to have a guard goose for the flock, and thought we might as well have one from the critical list… perhaps we can breed later.  Plus, this breed of goose has an illustrious history of guarding.  Again, from The Livestock Conservancy, “The Roman goose originated in Italy. More than 2000 years ago, Romans considered these geese sacred to Juno (the goddess of marriage). In 365 BC, as the Gauls attempted to steal into Rome under cover of night, it was the honk of a Roman goose that awoke Marcus Manlius and saved the capitol.” 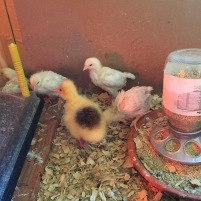 Our little gosling is a lovable tyke; he really likes to be held and we do so often throughout the day so that it grows up attached to us as well as the flock.  The “flock” aren’t being very welcoming at the moment, mostly the ducks really… protecting their little chick friends.  We have him separated from them by a screen right now, they will get to know each other after a few days and become integrated.  Actually, a few chicks have jumped over the screen a few times and spend some time with him, eating his food, but also giving him some company.

More information about the breed in general: the Roman goose is a small breed, weighing 10-12 lbs. They are a moderate egg-layer, and breeders can expect 25-35 eggs per year. In Europe, Roman geese are utility birds, bred for a rapid maturing, small, meaty carcass. In North America, many strains are largely ornamental, bred for a distinguishing crest, or tuft. The preferred coloring is completely white; goslings often have grey areas, but these are generally molted  out within the first year.

We just adore little Roman! We’ll keep you updated on his/her progress.  Until then, as always~ Thanks for reading!

Today’s Weather: It’s cooled off a bit. High was 73° today. Started out the day with a spit of rain, but cleared up to partly cloudy.  Was a great day to take some walks with George and Patty who were visiting. Low tonight is supposed to be 43°.

Egg Report: 6 today.  Everyone laid yesterday, so a few were taking a break. I think we are now averaging about 9 eggs a day.  Not bad!

1 thought on “A New Family Member”