Today the littles got to go out for the first time. We thought that they would enjoy the freedom and the opportunity to go outside. We also thought that, since they’d been living in the brooder side all this time, they could go outside during the day and come back in at night. So we opened the bottom brooder and they tentatively crept out. There was a lot to investigate inside, in the foreground you see the ducks night time area, to the left towards the back is Roman’s little sleeping quarters, and the top shelf of the brooder – at back – has the newest littles, the newbies. I wasn’t there for the grand exit, but Sue said that they didn’t get brave enough for the full outdoor adventure. The second time she tried, Roman was out on a walk about and he chased them all back in! We’ll just keep trying until they get used to the idea.

Roman was able to get out too this week. Yesterday he had his first experience on the ground with the grass and rocks and things. He stood for a minute, looked all around, flapped his little wings and ran in circles. Then he wants to follow you all over. Sue caught Roman following Dustin around today. He’s so fun and excited to be out and about, as long as there is a friend around. 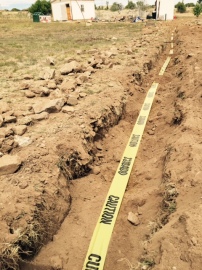 On the excavation side of things, Sue and Dustin are almost done with the ditch for the electrical and water. The piping is all laid and then  partially filled in. On George’s recommendation, they laid caution tape along the top, so if at some other time someone is digging, they won’t dig too far down past the caution tape. This week my Aunt Carolyn and Uncle Jerry are visiting from New Mexico.  Uncle Jerry used to be a large equipment operator for the Salt River Project here in Arizona; he was able to give Sue some tips on using the front loader and filling in the ditch, so they were able to get a lot done today.  Wednesday the electrician should be able to pull the wire and maybe finish that project!

The chickens were watching and decided to jump on the excavation band wagon! The other day I caught them dusting in these huge holes in their run. They were so very happy!!! Dusting and scratching and having a grand ol’ time. It’s kind of hard to tell, but these holes are as deep as the chickens are tall. Now they have a very bumpy chicken run!

O.K.- the final “first” for this weekend was this. Don’t worry, it’s just a gopher snake. Our friend George says that “Glossy” snakes have similar markings but are smoother. Ours was definitely a gopher snake though and we’re glad to have him/her here, because we have so many gophers that need eating! If we see any more, we’ll certainly let you know! Until then, as always~
Thanks for reading!

Egg Report: Today we had 7 eggs. Yesterday we had 9, the magic number. I’m going to predict 10 for tomorrow. Sue’s prediction is, 9 (that’s safe). We’ve noticed Imen wants to be sitting, so we may give her some Easter Eggs to sit if that behavior continues. We’ll see.