“How was your weekend?” Isn’t this the Monday follow-up question to Friday’s “What are you doing this weekend?”. In general, I don’t ever tell people at work what we did over the weekend. They already think I’m weird enough as it is. Most of them eat, breath, and sleep Real Estate; they have a difficult time understanding that it’s just my day job. HOWEVER, you people get what we’re dong here… or at least you want to try to get it. So, we’ll fill you in on how the Making of Stonehenge turned out.

Bottom line, we’re not quite done. Let me explain. We have some horrible gophers here! They are cheeky buggers too! They are not afraid of us. Right now they are busy working on Dustin’s garden and stealing the readily available chicken food in the littles’ run, but once we start planting in the circle garden, they will home in on it like there’s no tomorrow. That’s why we’re lining it with the welded wire – I wrote about that on Friday. So this was the plan:
1) move the rocks and connect the circle,
2) line with welded wire to make the gopher proof barrier,
3) put down a layer of cardboard,
4) put down a layer of horse manure from Mr. Kelly’s stables,
5) make the worm&compost areas/walkways,
6) put down a layer of dirt (this one isn’t firm yet- we don’t have that much extra dirt),
6 or 7) layer of mulch robbed from the depression garden.
So where are we in all this? – We’re still on step two, “The Lining of Stonehenge,” and we really thought we’d be on step 4 or 5. How does this happen?  Let me show you the tedium sequence of creating a gopher barrier out of welded wire.

First, purchase as much welded wire as you think you’ll need… then go back and get some more. Welded wire is expensive, but if you don’t get the small strong stuff, you might as well not even bother.

Second, lay out your wire along the ground, realize that you’re using almost one roll for each pass inside the circle… then go back and get some more.

Third, take your tin snips and cut off the wire edge along the length of your layer. You have to do this as close to the edge as you can so that you have little metal prongs as long as possible to connect to the adjacent layer. What we’re doing is lacing two widths together so that the gophers can’t push up between them and get into the garden. Why not overlap you ask? Well – that takes even more wire and – you guessed it – then you need to go back and GET SOME MORE! Plus, they could just find the weak spot and push up through it, squeeze between the layers and eat all the veggies! So, no. We are inter-lacing and we’ll be stronger for it (perhaps not our backs, hips, nor butt – but hey, gotta do what ya gotta do). 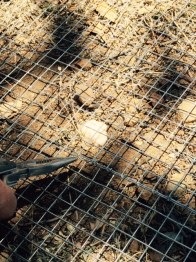 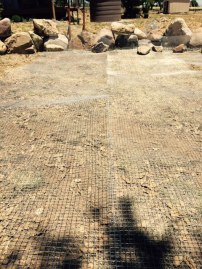 one side and I did another. This was the finished product after we worked on it all morning. What you see is three widths of wire that have been laced together. It was about 1/3 of the area of the circle… well maybe more, because whose doing any math at this point? Our hands were really sore by the time we were done with that Saturday afternoon. That was how we left it that day.  Sunday, is our Sabbath day. Monday, Sue did another one by herself. Today, in the late afternoon sun, it looks like it might be a landing pad for an extraterrestrial space ship, but it’s just a trick of the sun! Three more lengths and we’ll be ready for step three! (We might have to go back and get some more.)

Even though this was a big part of our Saturday, we did do some other things. Before we even started in on the lining of Stonehenge.  We thought it was going to be an amazingly beautiful day – turns out we were right – and we decided it would be a grand day out for the Specks.  Not out with all the other teens, ducks, and Roman mind you, but out in the chicken tractor so they could enjoy the grass and fresh breeze, be in the shade or the sun as they like, and commune -through the chicken wire – with the older chickens.

The Specks’ Day Out

The Specks are going to be 6 weeks old soon and they’ll need to get acquainted with everyone else before they are just rudely added to the mix. We also thought it was about time because, every time we go in to feed or water them, they’re at the screen saying, “Let us out!” (Yes, we know that’s what they’re saying – we studied their language. Just believe it! OK?) Right, so – Let us out!” and we did. Here they are, enjoying a grand day out.  You know what they’re saying?  “Let us out!” Just can’t quite yet.  I get the feeling they’re never going to be satisfied; we’ll put them in the large run and they’ll be at the fence saying, “Let us out!” We’ll try to capture their entry into the big world. Until then, as always~
Thanks for reading!

Today’s Weather: HOT! it was 91° when I came home from work today, about 2:00 p.m. Currently, 6:42 p.m., it is 81°.  We had the air conditioning on last night because there wasn’t even a cooling breeze. Low tonight will only be about 60°! Seems Spring has gone and Summer is fast approaching.

Egg Report: 10! We’ve been taking them from under the broody ones and our numbers are getting better.  They sure get cranky though – you need to be sure and distract them with something while you reach in underneath, or else you get a pretty hard peck!!!