Yes, that’s the word for today: bountiful  boun(t)əfəl  adjective 1. large in quantity; abundant. “The ocean provided a bountiful supply of fresh food.” 2. giving generously “This bountiful God has thought of everything.” synonyms: plentiful, ample, abundant, copious, profuse, bumper, fulsome, inexhaustible. Of all those synonyms, I really enjoy the word bountiful. Over time, since the early 16th century when utilization was plentiful, the use of the word – in every day language – had been on a steady decline; until around 2010, when it began to enjoy a resurgence of mention in popular culture. Does that mean that the general outlook of the populous became more positive? I like to think so. Read on for our example of a bountiful day. 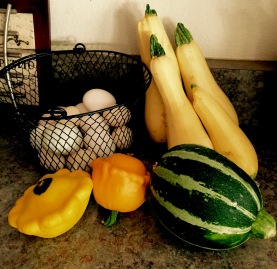 Still Life of a Day’s Bounty

Late in the morning, Sue sent me this photo. I like to call it “Still Life of a Day’s Bounty”. She watered all the trees and gardens this morning, and these squash were her reciprocal gifts. That is how I like to look at the fruits of the gardens – a gift. We plant, feed, water and, in return, to ensure the spread of their kind, they give us their fruits. Sure, we eat them, but because we are practicing a sustainable agriculture, we also save some of the seeds for planing the following seasons. This is why we’re attempting, going forward, to plant Heirloom varieties; those plants that have been proven to have good seed viability, and that are true to their parent plant.  Many of the harder squash that we planted out are second generations. Our Snow Peas, which were rather decimated by the gophers, have all dried out in the pods… I don’t count that as loss, because they will give us our start this late fall, into winter. I consider it all a part of the bountiful harvest that we enjoy each day.  Such a great harvest that we’ve been forcing squash on others! But let me tell you – summer squash makes amazingly good sweet quick bread. Much akin to Zucchini Bread; my mother has taken to calling it “Golden Summer Bread” and it even has my niece, Rhiann’s, seal of approval.

The eggs all came from the morning gathering as well. FOURTEEN! If you’ve been reading you’ve seen that our egg report had seen some severely declining numbers. I was blaming the heat, but the chickens were hiding them. In the walls, AGAIN! Silly, dang chickens. Sue found 10 in the walls, in areas that they hadn’t laid before, so we just weren’t checking there. And then she found four in the broody buff nest. Later today, we picked up six from the nesting boxes – where the area supposed to be! So that’s a total of 20 eggs today. We are going to have to go back to the daily hunt to make sure we won’t miss any. They no longer will receive my good graces on low egg count days… we’ll simply look that much harder for the eggs. What are you gonna do? If we catch them in the act, we’ll share that funny photo with you. Until then, as always ~
Thanks for reading!

Today’s Weather: Hot again. Mid-day it was 100°.  Right now, around 4pm, it’s back to 93°. There is some cloud cover, a breeze, and rain at a distance. This always helps to lower the temperature. So far we’ve only had fantastic light shows at night, and very few sprinkles. The Monsoons are slowing making their appearance.

2 thoughts on “What a Bountiful Day!”