This was a quiet weekend. Not that we didn’t do things, but that it was just kind of “more of the same”.  Saturday we gave the chickens more room to roam by combining two fences and pulling them out as far as possible – they seemed to enjoy the new territory. Then we worked on planting out the blackberry bushes under the shade of one of the oak 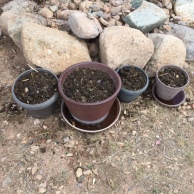 trees, and getting ready to plant out others, into pots, as well. We’ve been collecting horse, goat, cow, and burro manure, along with household scraps and coffee grounds, for a while now, and composting them in bins made from pallets; I mixed up 2/3rds compost and 1/3 dirt for a potting mix/soil additive to use on the plants. By 2pm, I was just done. It was so hot and beginning to get a little muggy, so we simply finished off doing the normal chores and called it a day. We weren’t really expecting rain until midweek, but that night we had some sprinklings… just a taste of what was coming.

According to Wikipedia, we are not officially included in the major monsoon systems of the world. Monsoon is traditionally defined as a seasonal reversing wind accompanied by corresponding changes in precipitation, but is now used to describe seasonal changes in atmospheric circulation and precipitation associated with the asymmetric heating of land and sea. Usually, the term monsoon is used to refer to the rainy phase of a seasonally changing pattern, although technically there is also a dry phase. We’re not included because we have an incomplete wind reversal. Well, since we really have winds coming from all directions, I can’t see how we could have a complete reversal anyway. We do, however, meet most of the requirements. Yesterday it came out in full force!

Off of highway 82 – Photo by Steven Maguire

It was the first true monsoonal moisture of the season. We were coming home from town yesterday afternoon when the rain broke. We saw some amazing lightening on the way home, towards the east, and the rain was coming down in buckets. The temperature plummeted (that’s one of my favorite aspects of the monsoons)! When we reached the gate to the driveway, it was a deluge. I got out to man the gate and just between the time I opened and closed the gate and ran to the carport – I was drenched to the skin, literally! Sue ran to shut the large doors on the chicken coop; water was already coming in and saturating the hay inside the doors. All the little guys were in, even Roman and the ducks. The goats were in their house looking out in befuddlement (they don’t really like the thunder either). We took refuge in the house with the dogs, but watched how the rain ran down the property so we could make a plan to divert it later. Today, Sue spent most of the day digging diversionary ditches, so maybe the water will run into our prepared catchment areas rather than straight down the hillsides to the road. Still trying to keep as much water on the property as possible.

All in all, it was a glorious rain! It filled the rain water tank to overflowing and Sue had to drain it into the “pond”.  The water stayed in the pond most of the day, which was uprising; I thought it would probably just sink right in.  Our squash plants are still very happy today, even though it was quite warm today, and we didn’t need to water the potted trees – for a change. Everything perks up during the monsoons. The trees, the native plants, the birds; all are so very happy to have a respite from the heat and dryness. The evenings are spectacular and we are able to open the house and let in that wonderful fresh rain smell. Wish you could experience this with us… maybe you have elsewhere, if so, you know exactly what I’m talking about.  I haven’t been very good at capturing this by camera, and I’ll never be able to bottle the smell, but I follow a page on Facebook called, “Cochise County and It’s Wonders“, which has some amazing photographers in their membership. I’ve shared some of their photos throughout this blog today, and – if you’re friends with me personally on FB, you’ve seen some of what I’ve shared there, but I encourage you to visit the page and browse through the wonderful sights for yourself. OR – you could come visit us and experience things first hand! We are always open for visits, come down for the day if you’re in Tucson, bring your rig and park it by the house for a time, stay in town for a few days, or Old Bisbee, or Tombstone, if you’re retired or active Military you can stay on Post at Fort Huachuca (we did on one occasion and it was lovely). So many opportunities and so many great things to see. Visit, it’s what the cool folks are doing these days! Until then, as always~
Thanks for reading.

Today’s weather: Hasn’t rained here yet, but raining all around us! Currently (4:08 p.m.), it’s 80°. More of the same is predicted for tomorrow!

Egg report: Yesterday we only collected six, but the day before (Saturday) we had 11!!!! Today we’re back down at 7.