A couple of days ago, I mentioned that we ordered some little Cochin chicks. They’ll be here towards the end of August, and we’re hoping that Maeve will want to mother them a bit. Since then, we’ve decided to beef (ha!) up our egg laying population as well. If last year was any indication, winter will be hard on the chickens. We want to make sure that we’ll have a good number of layers come the spring. So this is what Sue ordered…

7 Rhode Island Red Females (I used to call these “monster chickens” when I was in high school – well, I still do – because they are so much bigger than the Banties that we always had when I was growing up), 7 New Hampshire Red Females, 7 Pearl-White Leghorn Females, and 7 Single Comb Brown Leghorn Females. They throw in one “Free Rare Exotic Chick,” but don’t get too excited, it’s most likely going to be a rooster. Here’s the run down of their characteristics, as given by the hatchery we’re using at the moment, Murray McMurray Hatchery.

Rhode Island Red: “This is one of the most famous and all time popular breeds of truly American chickens. Developed in the early part of the last century in the state of the same name, they have maintained their reputation as a dual purpose fowl through the years. Outstanding for production qualities, they have led the contests for brown egg layers time after time. No other heavy breed lays more or better eggs than the Rhode Island Reds. Our “production” strain is keeping up the fine reputation of this old favorite. Baby chicks are a rusty red color and the mature birds are a variety of mahogany red.” New Hampshire

Red: “This breed originated in the state of New Hampshire at the hands of poultry farmers who started with R.I. Reds and by means of generation after generation of selective breeding intensified the characteristics of early maturity, rapid full feathering, and production of large brown eggs. We used to improve our flocks with males from a New Hampshire breeder who described his birds as being especially endowed with “spizzerinktum”; and they were unusually handsome and vigorous. The mature birds are a rich chestnut red, of a somewhat lighter and more even shade than the R.I. Reds and the baby chicks are also a lighter

red.” Pearl White Leghorns: “Over 45 years of scientific breeding research have gone into the development of this layer through a blending of special strains of White Leghorns. These pullets weigh about 4 lbs. at maturity, start laying at 4 1/2 to 5 months, and will continue laying 10 to 12 weeks longer than most good layers. Livability and resistance to disease are very high, and the feed to egg conversion ratio is excellent, holding down the cost of egg production. When our local farmers ask us to recommend the pullet that will lay the most eggs of top grade and size, of uniform shape, good shell, and highest interior quality, and do it on the least feed and in smallest amount of space, we suggest the Pearl.” Single Comb Brown Leghorn: “These

are generally recognized as the most colorful of the Leghorn family and like all Leghorns lay white eggs, are nonsetters, have large combs and white ear lobes, and yellow skin, shanks and feet. Our Brown Leghorns have been improved over the years by the introduction of the world famous Danish strain. The male is very handsome with orange hackle and saddle and black stripes in center of each feather. The female is a medium brown with delicate penciling; wings are a darker brown and breast is salmon colored. The chicks are striped like little chipmunks, and are so lively when just a few hours old that we can hardly take the lid off the box without having them jump over the sides.” These will all be great additions to the flock! 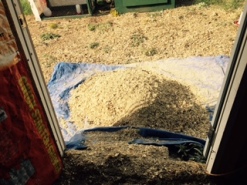 Out onto the tarp

So, today we spent some time cleaning up the brooder area for all the little guys we’ll have coming in soon. Right now it is housing the 3 bachelor roosters and one hen that is recuperating from a bad leg. Soon we’ll be moving the roosters out to pasture, and hopefully the one hen will be getting better soon and be able to be reunited with the rest of the flock. We took out all the shavings from the top brooder and from the main floor. What we’ve been doing that works well, is

Up into the truck

laying a tarp in front of the door and scooping the shavings onto it. When it gets loaded enough, but we’re still able to carry it together, we simply lift it over the fence into the bed of the truck. We start in the back with the top brooder where the littles will be for the first couple weeks. We wanted to make sure to get all the old food that may have 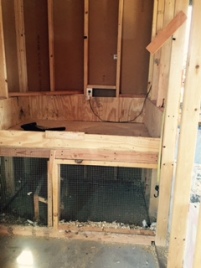 gotten encrusted on the bottom up off the wood. We used a spackle knife to scrap up the stuff… some of which had gotten a tad moldy when we had Roma(n) and the ducklings there – they were messy with the water.  Then we just swept out from the back forward. We had to use a wisk broom to get into the corners, nooks and crannies – just to be extra clean. It had been a while since we laid down the first layer. We’ve been trying out the deep litter method and

were quite happy to see that it worked really well keeping things clean and not at all smelly. If you look at this next photo on the right, you can see on the biggies’ side – which we haven’t cleaned out yet – the difference in the floor levels.  Some chicken keepers let that get about a foot deep, but I think we’ll probably be cleaning it once a year, so it might never get quite that deep. The chickens love to scratch around in there; they are constantly turning it over which helps keep it healthy

and composting.  To the left is the last shot of everything going out the door and into the truck. We decided to dump it all between the two apple trees in the depression. Then we can slowly move it to the areas we’d like to cover (some of our newer plantings need some type of mulching around their water wells, especially as we go into the dryer winter months. It really does help keep the moisture in the ground – rather than

All clean and new!

evaporating). We ended up with a nice clean coop and the roosters couldn’t wait to come in and investigate. We stored some of the brooding materials, like the warming table, underneath the top brooder so that it’d be close to hand and got rid of some of the bags, boxes, and other items that just seem to accumulate on a day to day usage basis. We placed a light layer of new chips on the floor and we’ll add as we need to. Starting our deep litter again from the beginning. We really wanted to make sure this side was clean for the newest littles, so we took everything out. Now, we are really ready to start them right! When they get here, you can be sure we’ll share some photos with you, right here! Until then, as always~
Thanks for reading!

Today’s weather: Odd. it’s rather deeply overcast, and its been spitting on and off. When you look outside, it looks really cold and damp; however, the temperatures have been in the high to mid 70’s most of the day. I’d really like it to rain a bit more.

2 thoughts on “Getting ready for new littles”