We seem to be over the various sicknesses we’ve had of late and this weekend we actually made some progress on various and sundry things. They’re not hugely important tasks, but things that need to get done regardless. Saturday we did a rather fun thing… we set up the weather station that my folks gave us for Christmas.  Yes, I know we’ve had weeks to do that, but it’ts really the first time we’ve both felt up to figuring everything out. You know how it is when you’re sick… your mind just doesn’t want to take on anything the least bit taxing. Anyway~ here’s the skinny.

There are three different sensor stations: one for temperature and humidity, one for rain, and one for wind. They all communicate with a base unit that is in the house. We had to find places where the sensors would be unimpeded by buildings yet would be in range of the base unit for communication.  The house is built mostly of cinder blocks, so sometimes the wifi signal doesn’t reach so well to the outside. Luckily, we have large windows! We were able to place the temperature/humidity sensor under the eaves on the deck – it had to face north and be protected, somewhat, from the elements. The rain sensor went out by the Hugelkultur garden; that one needed to be level, so it took us a bit of time, but we connected it rather well to a wooden 4×4 that also holds up some outdoor electrical outlets (recently fixed by our friends Ron and Kathy Hagen).  The wind sensor went on the end of one of the gabion wall garden  – unprotected from almost all sides, it’ll give us good readings on the 3 prevailing wind directions.  So, once we had everything set up outside, we had to figure out how to link up everything through our wifi. It took a 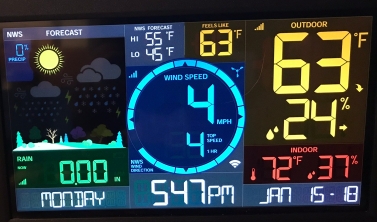 bit of finagling, mostly because we’re really not IT people, but if you’re persistent you can generally find a solution.  I added the application to my phone, so I can follow the weather where ever I am, see graphs for all sensors over the day, week, month, and year, and control the base unit, to some extent.  So, this is a photo of the unit and you can see that it holds a lot of information. It also uploads information from the NOAA Weather Service, from that we get the wind direction and the forecast.  I think this’ll be great to help us with the daily weather report. 🙂 Let’s do that now  – out of order, I know –  but we can see what we’re looking at here.
Today’s Weather and Forecast: Starting in the top left corner and going clockwise. NOAA Weather Service (NWS) Forecast – shows that there is 0% Precipitation tomorrow  and there will be sun, with a high of 55° tomorrow and a low of 45°. At the time I took this it was 63° and it felt like 63° according to the small numbers to the left. The humidity was 24%, but I have no idea what that arrow pointing right means. Then you have our indoor temperatures. Date, time, day.  The zeros represent our total amount of rainfall for the day. The middle is reserved for the wind information.  So, you see that our wind speed at the time was 4mph, and the top wind speed was 4mph. There were a few hours when the wifi was down, so the wind speed didn’t get recorded all the time.  But I think we now have a great tool for helping us record things. Enough for now.

Meanwhile, Saturday afternoon, Sue continued her goal to mow down all the weeds in the depression before the rains start. I started up potting the trees we purchased this summer and those that we brought over from mom.  We both felt we accomplished a few things that day.

Sunday was our regular Sabbath day, so only the basics were tended to; however, we did want to do one extra thing.  We have a Buff Orpington that had gone rather broody and we thought we’d give her some eggs, just to see how well she did with them. So, we decided to put her in the bottom brooder with her eggs – a bucket to be a little more secure – food, water, a place to be left alone. We gave her 7 eggs, a variety of eggs from chickens we’d really like to perpetuate. She seemed quite

happy in there all to herself. But, time has shown that perhaps I shouldn’t have moved her in the after noon, but waited until dark.  She hasn’t been at all interested in sitting on the eggs, regardless of the comfort level.  Sue put up a cover over the door to give her more privacy, but that didn’t seem to help. We’ll give her one more day in her new digs and then rescue the eggs and put her back on her side.  We’ll try again another time.
Well, I guess that’s the update for now, seemed like we accomplished more than that, but I suppose that was enough for us. I’ll see where the rest of the week takes us, until then, as always~
Thanks for reading!

Egg Report: It was not an interesting weekend for eggs. Low numbers, no duck eggs. The days are still short and the weather is still cold. Today we did not get a duck egg; however, we did pick up 9 chicken eggs. So, despite everything, they are still holding their own. It will pick up, I am sure.