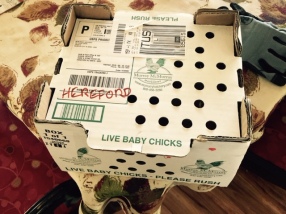 More chicks! Yes ma’am! The second shipment of chicks arrived this morning. The box is always enticing. What will they look like? (have they all made it?) Exactly how much cuteness can be sent through the Postal Service anyway? Well, the answer to that is – a whole lot of cuteness can be sent through the Postal Service!  Our Post Office is great. When the chicks arrive, they always call Sue right away so she can go pick them up before they’ve sat around for very long.  What do they look like??? 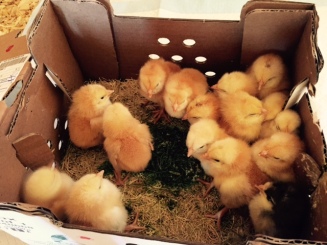 The were a little tuckered out from their ordeal – poor babes – but with a little magic water they perk right up. These chicks came from Murray McMurray Hatchery. They always send us an extra, “fancy” at no additional charge. Can you tell which one is the fancy? Do you hear the Sesame Street song going through your head? No? Let me put it there for you…. “One of these things is not like the others!”  We never really know what the fancy is, so it’s always fun to try and figure that out.  At the request of my Admin, we’ve named him Sylvester. If it’s a hen, we’ll call her Silver. But Sue and I are convinced that, by giving away fancies, the Hatchery is really just getting rid of their extra rooster chicks. That’s ok, because we always seem to be in need of the odd rooster.

Speaking of which…. Yesterday we adopted a rooster from a family who lives with in the Sierra Vista City limits and ended up with a rooster that they couldn’t keep.  They were told that he’s a Silkie, but he’s actually a Bantum. Which is great for us, we didn’t really want a Silkie – they require a bit more special treatment. They are like the Pomeranians of the chicken world. They make excellent pet chickens, especially if you have young children – which this family does. They just aren’t really “farm” type chickens. The 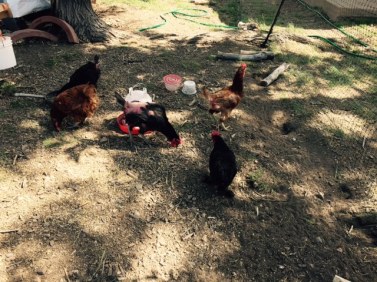 new little Rooster, who the kids named Vicente, is a great little guy. Very well tempered, in general, but not one to let those hens pick on him. He held his own quite nicely last night when we put him in with them. Sue said this morning he was already calling the hens over when he found good treats or bugs. They, the hens, are bit leery, but are slowly taking a shine to him.  We’re hoping that he can keep them from picking on each other. We’ll see.  Here’s a photo of them all together today.  Vicente is the chicken to the lower right hand of the grouping.  You can see his little feathered feet – Bantum Trademark, that.

The other very exciting thing that happened, was that we moved the older Red Rangers, the Ducklings, Goslings, and Blackie (the single Banty chick) out into the Tractor, last night. This chicks and the goose were first in – as they were all together any way, we didn’t need to wait to move them when it was dark. They were very happy with their new home. We gave Octave a shallow dish of water to play around in and he was ecstatic. It’s been quite hot here, so now he is able to cool of whenever he wants. We added the ducks and Blackie after darkness fell and they were all beginning to quiet down for the the night. It took a bit of time for Blackie to adjust, first time he was really way from a mama. The ducks are still giving him a bit of a bad time, but Sue’s pretty confident that he’ll be just another part of the flock in a couple of days. Above is a photo of them all in the chicken tractor.  Because they are quite small, Sue took time today to add the black plastic fencing to the inside of the electrified fence, so that – when they are able to go outside of the tractor, the chicks won’t be able to slip outside. The black fencing is the same as we’ve used before, just plastic fencing that comes in a roll, has 1×1″ squares in it… we use it for various things, keeps animals in or out, depending.  These guys will be great!

I think that’s all the news on the littlest peeps. We won’t have any more coming until sometime in August, I believe. Those will be layers. We’ll get them late summer and they should be ready to lay by spring.  I think they will all be Easter Eggers. So, that’s exciting! Over the next few days, I’ll be in California, spending time with my family. I will continue to blog and will also try to get together with my parents neighbors who attended the Armed to Farm seminar at the same time as Sue. I’m hoping to make a good field report out of that contact. Share some info and stories and see what they’re doing and how they are making it work. So keep an eye out for news from the road! Until then, as always~
Thanks for reading!

Today’s Weather: We’re on a trend here…. HOT! It was 102° when I came home. It’s raining down Mexico way, so that’s making the air rather moist. Which is good and bad. Always feel that the moisture makes the heat worse. Sue would like the rain to hold off for another week because the chicks out in the tractor aren’t fully feathered.  Looks like she’ll get her wish, the rain that was in the forecast for Saturday has now just turned into clouds. At least the temps will be dropping a bit – low 90’s.  Right now it’s 98°.  Tomorrow’s high is supposed to be around 97° with an overnight low of 68°. Evenings have be gorgeous after about 7:30.  Here’s a shot at about 7:30, from earlier this week. “Full Moon over the RCW”