Here we are, past mid-July, and we are just gettin’ into the summer fun here. It’s difficult to believe that we’re over half way through the year. Ugh. As we were reminded today though, there’s still time to put up your lemonade stand. I never really tried to do that as a kid – we lived too far out in the middle of nowhere – so I don’t really relate to that, but the CPA we saw today kept likening us to two girls selling lemonade. After we left, we weren’t too sure if that was a slight or not.  He gave us some good advice, which is what we were after… it was just a somewhat demeaning simile. Oh well, you gotta start somewhere, and lemonade is as good a place as any! It’s certainly refreshing, right? We do have some other summer fun going on around here, wanna dive in? 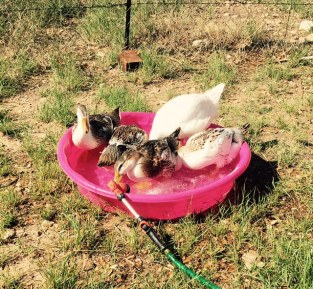 The Red Ranger batch #1’s are growing furiously – and enjoying life to the fullest. Which is good since they have an end date of August something. With them, still, are the new ducks and Octave, the gander. They are almost fully feathered and are getting very big. To give the aquatic ones more aqua, Sue gave them one of the new kiddie pools we picked up at the dollar store. Today she caught them all enjoying a dip in the 108° weather (it’s rare that they all share the pool at one time). For some reason, a couple of the ducks really like to play in the water as it’s coming out of the sprayer, filling up the pool. Maybe it’s like running water in a river to them. Whatever keeps ’em cool!

Because they are all getting so big, Sue decided they needed more room to roam. I came home one day and she had laid out metal fence posts along the drive way and explained that she wanted to put in a temporary fence for the Rangers so they could have access to more grass area. That same evening we had the 2 inches of driving rain and hail, so after that passed, she pounded in the posts while the ground was sodden. Always good to make hay while the sun shines – so to speak. Now they have a whole new swath of area along the driveway in which to forage and help us re-energize. After they are gone, Sue wants to put the Banty mamma and her little chicks in there… maybe all the mamas with chicks, so they can get big enough to put in with the older ones. 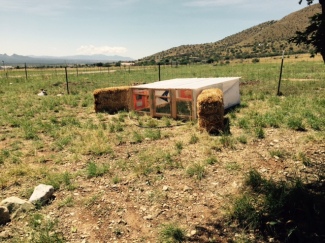 Across the front yard, on the other side of the driveway, preparations have been made for the Red Ranger Batch #2’s excursion out in the real world. We’ll move them tomorrow evening and get them used to their new home. Temperatures are supposed to start cooling off again for a few days and that will give them time to acclimate. They are starting out with a larger spot around which Sue had put up another temporary chicken wire fence. Since these guys are in our yard, with the dogs running around, Sue’s not so concerned about the coyotes and stuff. Although we have had a couple, off and on, out in the large field. They are there usually in the morning and on their way walking through. They seem to be using us as a thorough fare, mostly, but they do check out the chickens in the RCW if given an opportunity. They aren’t afraid of people – so much – and the dogs don’t seem to faze them; guess they know they are on the other side of a fence. One of the things we’d like to do is put welded wire fencing up around the entire property perimeter, but that’s going to have to be after a few other things are done.

With all the rain we’ve been having, welcomed though it is, the run in front of the permanent coop tends to become a bog. You can loose a shoe if you’re not careful. Some straw spread out in front of it always helps, plus the chickens like to get in there an scratch around… keeps them out of trouble for a while.  I really thought that they’d go after some of the bales that we already have in there and get them all tore up and scratched around, but they don’t seem to be tearing them apart as quickly as the others. Maybe if the bales start sprouting from all the rain we’ll see the chickens become more interested. Until then, the half a bale that Sue spread out will do the job just fine. 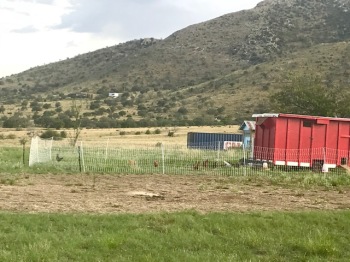 One other thing we took care of yesterday was moving the RCW to a new patch of pasture. We did it Monday, instead of the scheduled day of Saturday, because there was too much clean up to do after the really hard rains, we needed to move the chicken tractor for the RRb#2’s out into the yard, and fix the electric fence, around the RCW, that had kinda pooped out after the storm. Those things were a bit more pressing, and I had to do the Saturday morning egg deliveries as well. So many things. We took care of the move yesterday morning and I think we did it pretty fast. Maybe in an hour. It helps that the ground is still soft enough that we could easily push in the posts, rather than have to use the mallet and the huge metal awl for every hole. The girls were so happy! You can see part of the brown spot they were just on, and we moved them up and across to a new green spot. Now we’ll seed where the chickens just were, with regenerative plants like clover, and let it grow in well as we move them around the pasture until we can place them back on that plot again. It’s all cyclical. Like the seasons.

This turned in to a longer report than I was expecting, which means I’ll probably be at a loss for words tomorrow. But we’ll be moving the RRb#2 chicks and Sue will be working on another project, surprisingly, so we’ll at least have those things to report on. Until then, as always~
Thanks for reading!

Today’s Weather: In a word, hot. High was 108°, looks like our over night low will be around 71°, not much relief there, but some. Temps are supposed to be getting lower over the next couple of days. Currently, at 6:30 p.m., it is 93° and the wind is picking up a bit as some dark clouds are coming over, but the chance of rain is only at 13%.