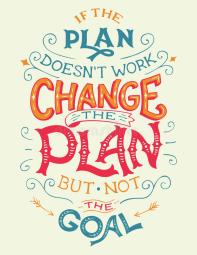 This is week two of the new “working” plan; I think it’s “working.” We hashed out the things we wanted to work on and put them in order of “need to get done” and it’s been turning out pretty well. We’ve had to tweak the plan a couple of times due to weather issues, but overall it’s been a good change. We have lots of goals- so many that it becomes overwhelming if we just look at all that needs to be done. So, for me at least, it’s easier to cope when we have the steps laid out for the short term. Otherwise, I have a tendency to 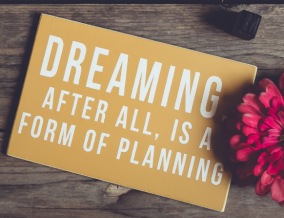 simply shut down. We’ve got the dream and can see some of the projects that we need to finish to get us there, but working on the most time sensitive projects just helps to keep things rolling well. Some people say that a goal without a plan is just a dream, but I say that dreaming is a type of planning too.  If the dream didn’t exist – no goals would be there – no plans would be needed – nothing would happen. So, dreaming is needed to to get all the rest of that going.  This week our dreams did get a little closer to becoming reality. Step by small step – so we can handle it. 🙂 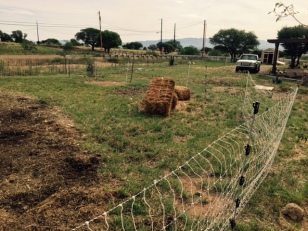 We’ve already talked about what we did Monday – Wednesday, as well as what changes we made to the plan to accommodate the fickle weather patterns. So, I’ll just stick with Thursday and today. Yesterday, because we were afraid it was going to be so hot, we didn’t put the RRb#2’s out in the tractor, nor did we work out in the orchard. What we did do, was move the fence that is semi-permanently up around the coop. We brought it down the property, towards the house and gave them some green grass to munch on. We also moved the straw bales around so they could gobble up the yummy bugs that congregate underneath. 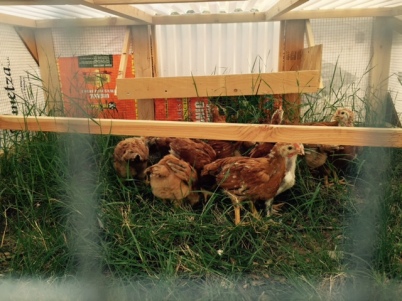 This morning, we were able to work on the orchard for a while. We’re still getting the tree sites ready and creating really nice wells, about 20 feet in diameter, to help capture the rain water. At some point, Sue’s hoping to put a rain water capture system up hill from the trees so that we can do gravity fed watering if need be – that’s part of the dreaming into reality.  After I was done and off getting ready for work, Sue mowed the entire yard around the house. I’d guess it might be an acre of land. She has to use the lawn mower because there are too many trees, fences, and tight spaces to be able to use the tractor. Now it looks like we’re really a posh manicured place. When I finally got home, we were able to move the RRb#2’s out into their new little tractor. They should be really happy out there with all the area they have to roam, and they’ll have fun foraging for bugs through the grass. They were a bit skeptical, but by the time we left them, they were checking out their new place and scratching around in the dirt. They’ll be happy campers soon.

Tomorrow looks like it may find us out in the orchard again. I’ll need to do an egg delivery, but I’m still not selling at the market – we’ve been doing really well with the eggs going to Tom and Ecoasis. Tom, the baker, told me that he’s hoping to up his production – once they move into a bigger area on Main Street in Bisbee – so he’s hoping we’ll be able to supply him with 20 dozen by the spring.  I told him we would be happy to do the best we can, but wasn’t sure we could guarantee that many.  He assured me he wasn’t trying to get rid of us, and that he’d just supplement with other eggs until we could meet that production. So – that’s good news! Hoping he keeps us on, because it’s so nice to have a ready customer each week. Guess that’s it for now. Hope you all have a fantastic weekend! We’ll be back with another post on Monday. Until then, as always~
Thanks for reading!

Today’s Weather: It was a more mild day than those previous. We had a high of 97°, right now it’s 86°, and our overnight low is supposed to be around 69°. We did get some rain last night, but I’m not sure how much exactly. Tomorrow it’s supposed to be mostly cloudy with a 25% chance of rain.