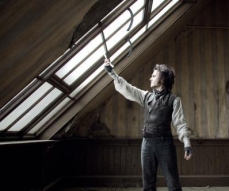 “…my arm is complete again!”  That’s a nod to Sweeny Todd, I use it for my friend John S. who enjoys quoting that line when he pulls out the carving knife, but also because it kind of describes how Sue feels to have the tractor back in it’s comfy spot in the garage. That’s Sweeny, to the right, I thought about superimposing a photo of the backhoe to his arm so that my reference might make more sense; then I decided that I’m probably one of two people that is going to get that anyway – so, meh. What the Trails West Tractors guy discovered was that a transmission seals was completely disintegrated and that was causing havoc in many systems, plus making a horrible noise.  Luckily, it was still under warranty!!! So, Sue just had to pay some labor and cost for fluid, diesel for George’s truck that hauled it back and forth.  It was so much better than we had feared! While the tractor was off getting checked out, we were using wheel barrows to move large quantities of wood chip compost, and it got old quickly. We’re now ready to get back to the regularly scheduled plantings that we need to finish. Monday is a holiday, so we might get quite a bit done now.

As the rest of things goes, the last two days have been relatively quiet. Today Sue had to make a feed and greens run into town and I think that was probably the most exciting event. She also did rather a deep cleaning on Bob whose sore is finally starting to really heal speedily now.

This weekend we’ll be working on changing the bedding for Nudie Booty, Leggs, and maybe out in the RCW.  We’ll also look at Leggs’ foot tomorrow and see how we’re doing at drawing out the infection.  She really hates being in the crate; she is quite active all the time, so she’s probably going stir crazy in there.

Monday, we will be moving the RCW to a new patch. It doesn’t seem that they’ve been there all that long, but they have really worked the vegetation down to dirt. It’s time to move them. They’ll be happy to have a new spot.

I don’t know about Sue, but I’ve welcomed a rather quiet week. Of course there are always the normal chores and watering etc., nothing is ever completely quiet. Monday evening we should have something more to talk about. Until then, as always ~
Thanks for reading.

Today’s Weather: Rather a nice mild day today, if rather windy. High was 83°, currently – at 5:27 p.m. – it is 81° with 16% humidity and 1% chance of percipitation. We’ve had a mostly clear day, but this evening some clouds have started forming down Mexico way.

Cool Thing: Yesterday we had a Road-Runner hanging out on the porch (probably trying to catch lizards). He/she was driving the cats bonkers – but didn’t seemed impressed with their indoor antics. Sue caught him looking in.