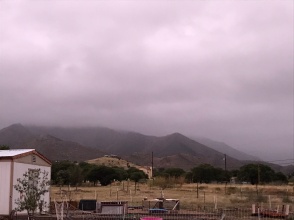 The rain has come. It began as a mist coming over the mountains, then seemed to pick up in intensity during the morning hours; it has remained with us through out the day. There are long strings of minutes when it holds back, only to pour again as if making up for this lost time. I believe it has settled in and decided to stay the weekend. Monsoon season is over, now we must be into the fall rains. We always welcome the rain, but were hoping that it would have held off until tomorrow, or even just until later this evening, so that we could have had Tom come to help us right the RCW today. As it was, the day was too wet.

Around noon, Sue got in touch with Tom. He felt that it would be way too wet all through the weekend. Monday he has a doctor’s appointment, so we might be able to get things taken care of on Tuesday, provided it isn’t still raining. The weather app says that it should be partly cloudy by then. Let’s hope so. The chickens are still doing fine in the

RCW, but I think everyone will feel better once things are back to normal.

Other than that, it’s been too wet to do much today. Yesterday we took some time in the morning to install the eye bolts – took some drilling to go through all the wood near the roof, but those bolts are in there quite solidly. We also finished caulking around the roof screws that had been leaking. I did those that Sue couldn’t reach the other day, while she was inside the coop drilling. You can tell which screws I covered because they look like meringue kisses. Dustin says that all that cake decorating experience pays off in construction as well. It was fun.

Tomorrow morning we’ll bring in Leggs and get her doctored up again. Not sure what else the weekend holds other than getting eggs to Tom the baker at some point on Saturday. We’ll let you know how our weather front fares. Until then, as always~
Thanks for reading!

Today’s Weather: Rainy. Not too terribly cold though. Currently, at 6:25 p.m., it is 59° with 87% humidity. We still have some chance of rain through out the night and on into the morning. Shows clearing around 10am tomorrow. Our overnight low should be around 53°. Today, sunrise was at 6:21 and sunset at 5:49.

1 thought on “it has arrived”