Don’t you just wonder that sometimes? You stand back and look at things, the focus is sometimes fuzzy, and you wonder…what’s happening? Maybe it’s the wind that was supposed to start at 11 this morning, but actually began in the dark hours of the day – wind always makes things seem… odd. Maybe it’s just that weird ‘Monday’ effect. You know, the one that makes you immediately nostalgic for the weekend. Whatever the cause, there were just some things this weekend,and today, that made me ask, quietly, to myself, mostly out of earshot of the chickens, goats, dogs and cats, “what’s happening?”. 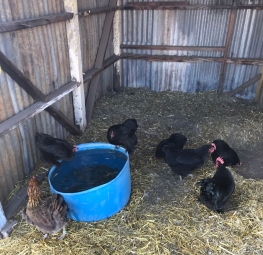 I neglected to report on Friday, and now I’m glad that I did, that we had – what we thought – was  our first loss to a hawk, or other bird of prey. We first noticed a missing Banty hen from Vicente’s flock on Thursday evening. I thought I was going crazy, “We had four Banty hen’s with Vicente, right?” I asked Sue when I came back to the house. “Because there are only three now. I’ve looked everywhere; I can’t find one! I didn’t see any feathers, no one is freaking out – they all are acting normal, like nothing odd went on. What’s happening?” Ok, that sounds more frantic that it actually was. We just decided that we had to chalk it up as 1 for the predators. THEN- today, at afternoon chores, I thought I was seeing things, but NO! There she was – back after 5 days of being AWOL. Where does a chicken go for 5 days? What’s happening here? We’ll probably never know, we’re just glad that she’s back. In the photo above you can see (left to right) one brown Easter Egger hen, five black hens (four of which are Banty’s, one Sex-link), one black Banty rooster. Go figure.

This Saturday we moved the fences for the oldies and the littles, combining them in the same range area. Previously, Sue had cut a hole between the two sides of the coop, so they had been slowly mingling. At this point, it’s more a forced mingling. Ha! We moved the fence in the morning, so everyone was out and they were all incredibly curious. They followed us around asking, “What’s happening?” They were overjoyed (yes, you can tell when birds are overjoyed) to have such a huge space to run around in and to have new green weeds and grasses to munch on. They’ve completely decimated the vegetation now – we’ll be giving them even more room sometime soon. After we were done, and just watching them run here and there, we spied Roma and Octave sharing a watering station. Sue and I looked at each other, eyes wide – “What’s happening?” Could this be love in bloom? We have since seen them walking together and sharing space – sedately, as Sue puts it. It’s difficult to tell them apart at first glance, but Octave is bigger than Roma; however, Roma’s head tuft is poofier – don’t dis a girl’s do! In the photo, Octave is in the foreground and Roma is in the back. Fun times.

Friday evening and Saturday afternoon really had me scratching my head and asking today’s prevailing question. In the evening, when I put the chickens up, I noticed that one of the hinges on the left door to the RCW – one we use mostly, because it is generally out of the wind – had become completely detached. How does that happen? Rowdy little 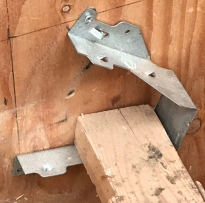 chickens. I made a mental note to let Sue know; she does repairs. Then, in the afternoon on Saturday, I went out to collect eggs and found that one side of the bottom roost had come off the wall. “What is happening in here?” I asked the two chickens scratching around in the bedding. They looked at me and said, “What? We don’t know what you’re going on about.” I think they are having major parties when we aren’t around, and all we see are the damages, which no one wants to own up to. The secret life of chickens. You know, those surveillance cameras are looking better and better! Whatever.

I guess that end’s my “what’s happening” segment. We will never know  the answers to some of these questions; we’ll just continue to ponder. Well, until we get those cameras anyway. If that ever happens, you know that we’ll share the interesting takes with you. Until then, as always~
Thanks for reading!