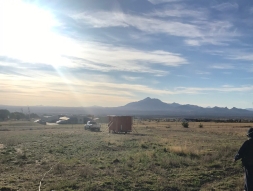 Saturday morning dawned on moving day, again. We took the RCW for quite a long ride to get it to its final destination. This first photo is where the RCW had been for quite a while. Those little campers probably thought they’d never get out of the wagon. This time, I took a video that  actually came out! I am – at this minute – uploading it to YouTube so I can embed it at the end. I am just taking it on my cell phone, so there 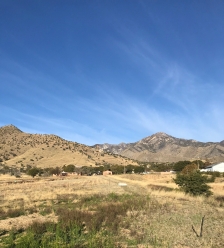 is nothing fancy about it. Dustin was able to help us out with the hook-up, and I didn’t even think about documenting that,n and I really should have, because it’s a pretty funny process… I only got the moving part. Oh well. One day I’ll remember everything. Anyway, this second photo is of the area they will eventually end up. The RCW has never been this far up into the upper pasture land. We’re hoping they can stay up here, in various areas, for a good while.

What takes up the most time, on moving day, is the fencing. We take it down a certain way; untie and remove the support stakes, make sure we get all the weeds untangled from it and then pick it up one section at a time, pile it on one person’s arms and then move it all together to the new spot. Then we do the reverse to set it up. Before that, Sue takes the weed eater and cuts down the high weeds were the fence will be set up, because the weeds can ground out the electric 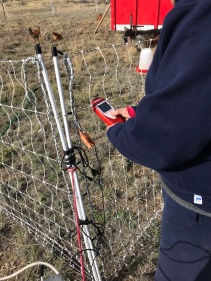 fence. This photo is of Sue weed whacking. The white on the ground is the fencing laid out where it will be set up. After it was up, supported, and hooked up to the electricity, Sue tested it to make sure that the current was strong enough. We weren’t sure how it would do over such a long wire set up. She added a great deal more length to the electrical set up – from the plug that’s in the middle of the field, and we weren’t sure the fence was actually getting a strong current. She has this neat gizmo that you hook around the wire and it reads the voltage, or whatever. I don’t pay attention to all those terms. She tested around the entire fence, and the current strength never varied and it was definitely getting the juice, so everything is working great. The chickens love their new spot and have lots of green grass to scratch around. They haven’t even really been eating their dry feed; they are having so much fun chomping on the field greens. It’s neat to see them all happily scratching in their new set up! They had been in the previous area for almost 8 weeks, they were tired of it. We are so glad that the wind held off long enough for us to get the move completed. They won’t be in this section for nearly as long.

As promised, here’s my silly little video. Hope you like it. Commentary by Dustin and I. Towards the end you’ll see Dustin’s dog, Thor, jump out of the truck – he was fine, he thought Sue was going to take him away from Dustin, I guess. Scared me though.

So, that’s it for our Monday report. I have an idea for Wednesday night, so I hope that I’ll be able to write it up for you. Stay tuned… until then, as always~
Thanks for reading.

Today’s weather: Rather a nice, warm day. The high was 81°. Overnight low was only 44°. Currently, at 9:39 p.m., it is 58° with 29% humidity. Sunrise this morning was at 6:15 and sunset was at 6:34.  Looks like we’re expecting an overnight low of only 45° tonight. More warm temps throughout the week. It was such a nice day, Sue ended up mowing the remainder of the house year. She said that the Goat Boys want to get out of their enclosure – they have a ton of new grass and weeds they can be munching if they really want to (I think they’re tired of being bossed around by Vicente – now that’s something I should try to get a video of!)