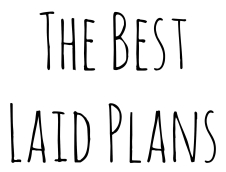 We have cases of “best laid plans” all of the time. We think something is just going to take a few minutes to complete – and it ends up taking hours. Happens often. This week’s best laid plan was “once the old fence is gone from inside the goat pen, Scooby won’t be able to jump it any more.” Well, that’s what we thought. We figured he was using the old fence as a spring board to get over the new fence. 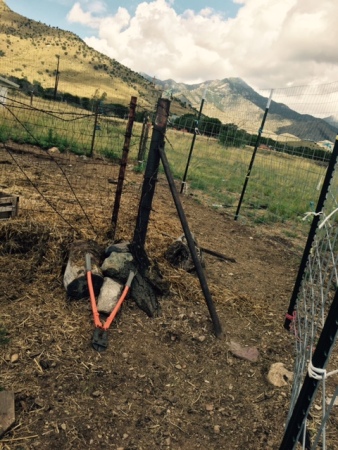 So, yesterday, Sue spent almost all of the day removing the old wire fencing  from the inside posts. It’s a bit hard to see, but to the left and up from the bolt cutters that you see on the ground, is some of the old wire fencing. (This photo also shows how great things are beginning to green up since we’ve had several days of rain in a row; and aren’t those clouds so puhrty?). Sue had lots of help from the goats and the chickens – they made sure she didn’t forget anything! Then they all walked along the new fencing to see if there weren’t some gaps that they could later exploit. One of the chickens got out in the afternoon – couldn’t find her way back in, Sue had to help her back over. To my knowledge, the chickens have decided not to wander. Scooby on the other hand was out by the evening. Dang goats! He was also out this evening as well. Luckily, Sue saved the old fencing; we’ll put it up along the top as we have on other legs of the pen. We now both think that he’s climbing another section of fencing, but we can’t confirm our suspicions because we never see him in the act. Grrr.

So, today is Thursday and our next regularly scheduled blog day is Saturday; however, we will be butchering the meat birds a week early – they’ve just grown so much we’re afraid they will not last another week in the heat and humidity – so I highly doubt that I’ll be willing to blog after we take care of all those chickens. That being said, we will have around 15 chickens available for purchase, if you are interested. We can’t ship, I’m sorry to say, so this is for local people only. Just leave a comment and I’ll be in touch. Until the next time, as always~
Thanks for reading! 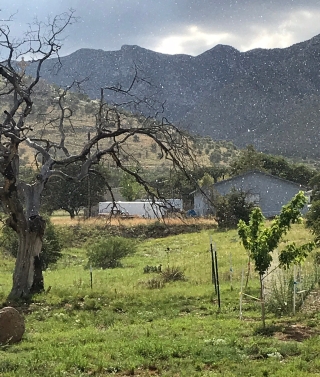