Wasn’t sure what we were planning on taking care of for today. It’s always and adventure, right. Sometimes it doesn’t matter if we pre-plan anyway; the weather interferes or something more important crops up.  Generally, there is a whole list of projects that need to be done and if something doesn’t work out for one, we have plenty of others from which to choose. That’s life on the farm.

Today we tackled the grasses in the leaf pond enclosure, where the three banty chickens are. They are protected by one of the electrified fences and when the grasses get too high, they can short out the fence. So today we took up the fence, section by section, and whacked the heck out of the grasses. We did the whole fence line and then worked on the inside until we ran out down the battery on the week whacker. As usual, I forgot to take a before photo, but here is an “after” which shows you the cut area and the non-cut areas. The chickens enjoy scratching through the cut grass and picking out the seed heads. We’ll continue to work on the remaining grasses bit by bit.

After this project was as done as it could be, it was breakfast time! Yay! Saturday banana pancakes – yum. Then it was time to tackle the beginning of the winter garden. I went through and found some seeds that would provide greens for us and the birds through the winter – hopefully. I planted two quarters of the circle garden in mixed lettuces, spinach, Swiss chard, kale, sorrel and parsley. It’s warm enough now that they should germinate just fine, but not hot enough to make thing bolt right away. One quarter of the garden has several squash plants still producing and two egg plants that may actually give us some fruit before it gets too cold for them. One quarter of the garden has yet to be planted, I may use up the remainder of my chard and kale and greens in there in a week or so. We’ve discovered that using the straw around the plants helps out a great deal. We don’t have to water the garden nearly as often as we were. In the newly planted areas, I’ve covered them with a bit of straw until they germinate, then we can use the straw between the rows to cover them more. We actually had four leafy greens volunteer from last winter’s cabbage type plantings, so they’ve been incorporated into the garden now too. Feels good to get this going. I thought I had some broccoli seeds, but I guess not – think I’ll got to Ace and see what starts they have. The geese love broccoli. Found some onion seed that I think I’ll add into the herb garden as well. One of the old duck pools sprang a leak, so we kept it for gardening – think I’ll do some root veggies in there for winter too. At least we have a long growing season! OH! I found some snap peas to plant, so I’ll liberate my pea fence from the berries and put it to good use as well. 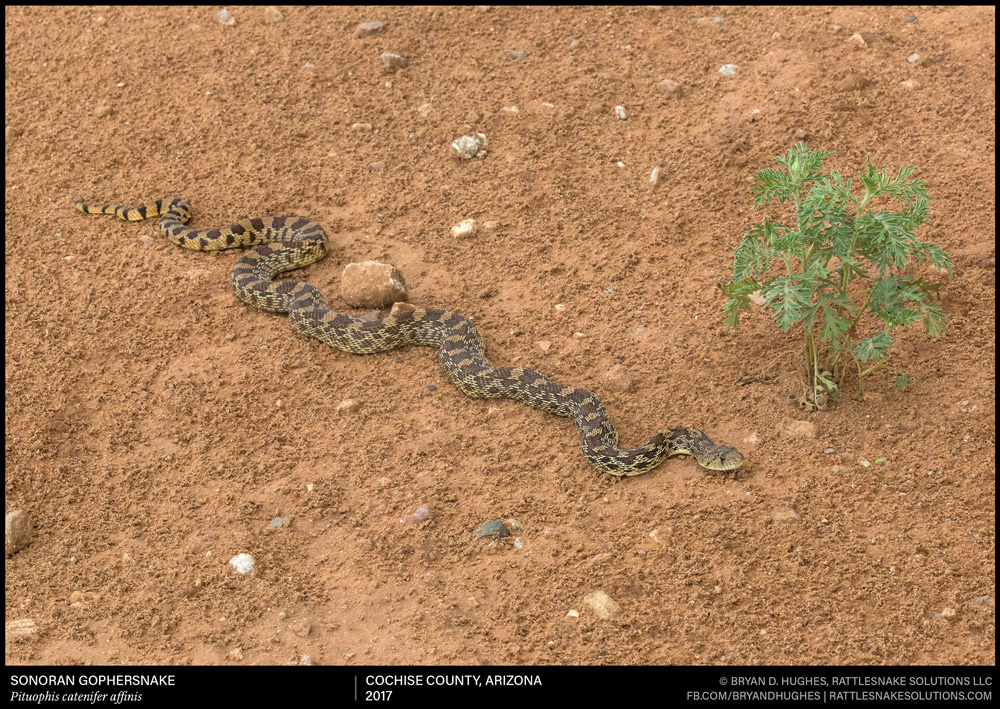 Those were the accomplished projects for today. The other event of note, was the capture and release of a Sonoroan Gophersnake. I went out to turn off the heat light on the baby Banties and found one of the adult Banty Roosters bullying the snake into a corner of the coop near the brooder. While the snake was probably after mice – for which we are very grateful – we don’t want them to get a taste for chicks. So I got Sue, we took the snake stick and a bucket with a lid and removed the guy from the coop area. Because we want it to stay and eat all the gophers it can possibly find, we took it up to the top pasture and let it go by a pile of limbs. He took off like a shot into the wood pile and I wasn’t even prepared with the camera. So above you have a stock photo so you can see what it looked like. They are quite pretty. We hope it enjoys the varmints out in the pasture and finds it likes it out there just fine.

Tomorrow is Sunday, so there aren’t any plans for projects – just normal everyday chores. We are hoping that the rain which has been predicted makes a stop above us and lingers. We’ll see what happens over the next few days. Until then, as always~
Thanks for reading!

Today’s Weather: It was 85° by noon today, and even though the wind that was blowing the rain clouds our way was cool, I came in from the garden because I ended up too hot. We had a few smattering drops of rain this early evening, but it left all too quickly. Looks like we have a 50% chance of rain for tomorrow afternoon. Currently at 7:41 p.m., it is 72°,63% humidity, winds out of the south at 9 mph, barometric pressure 20.88 inHg. We actually still have a 30% chance of rainf or tonight.  Sunrise today was at 6:07 and sunset was at 6:16.

Fun Photo: Ok, I had to reach WAY back into our past for today’s photo. I picked it because we’re coming up on the anniversary of our first trip out to this area. Fall of 2015, we traveled out over Thanksgiving to visit our friends Tia and Joan who had moved out here the previous June. We rented a cabin up Ramsey Canyon and in the morning had this visitor peek in the sliding glass door from the little patio outside. She’s a little Coues Deer; one of several who visiting every day that we were there. We also had wild turkeys and Javelina (collared Peccary for all you sticklers, like Dad) travel through at various times during our stay. It was a fun and beautiful weekend.