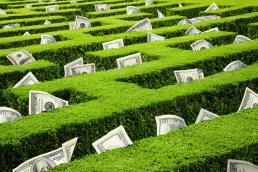 No, not that kind of hedge fund. More like, you know, funds. For the hedge. If you visit the “Dreaming into Reality” page, you’ll see that we have a list of ways that you can become part of the adventure, without even having to visit – although, we always want you to  come visit. Anyway, we did receive a very nice contribution from two wonderful friends… a while ago. We spent it on several palnts that we needed, and we jokingly called it the Conrad Hedge Fund. So— today’s post is brought to you, in part, by the Conrad Hedge Fund; furthering the work of feeding the community one chicken at a time. 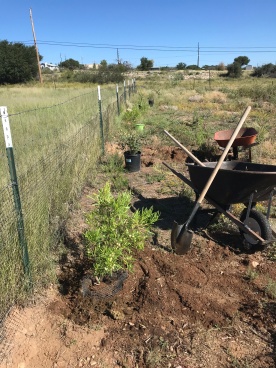 Through the Conrad Hedge Fund, we purchased several trees and shrubs that we hope will provide wind protection, shade, and snacks for the chickens who call the main coop their home. We heeled them in over two summers and planted them in their permanent home on Saturday. Here we are just getting started. Sue had dug the holes previously, but we had to clean them out a bit. We deliberated about the placement, came to an agreement mostly. The trees we planted were 2 Hop Seeds (which are really large shrubs, but I prefer to trim them as trees so they don’t get so gangly and they are easier to clean up), and one Mesquite tree. We only have two mesquite trees on the entire property – well, three now. The seed pods are full of protein, and you can 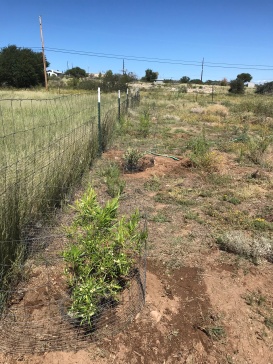 grind them into a wonderful flour.  We also planted 2 Jojoba Bushes – great berries, and a Desert Hackberry, also great berries. All these plants should establish well and then need very little water. This 2nd photo is after they’ve been planted, with their chicken protection cage around them. We’ve had chickens un-plant things before, so we want these to get a bit bigger before we let the birds play around them. Like everything else we plant around here, these went in gopher cages in the ground. This morning we noticed that the gophers began investigating the trees already. Dang gophers. At least we know what we’re up against.

The fence you see on the left is the cross fence that is between the chickens and the Chestnut orchard. After this photo was taken, I weed whacked along the fenceline on the other side. I was trying to make it so you’d be able to see the entire Conrad Hedge Line when I took the photos I shared on Sunday… no such luck after all, due to the large oak tree in the foreground of those photos. Oh well, it looks good in person and I was able to pull up a TON of Russian Thistle. Yay!  We have made a huge dent in the thistle proliferation on the property. From year one to year three I bet we’ve cut down the thistle growth by 2/3rds. Now, if we could just get the BLM to take care of it on their land!

That’s the update on the weekend. Yesterday Dustin spent a great deal of time mowing/weed whacking around the windbreak that was planted a few weeks ago. Those trees seem to have settled in quite well. This morning, Sue wanted to mow the upper field, but by the time we were done with breakfast, the wind was just gusting too high – 20 mph winds make it too crazy to mow. Instead, she continued whacking around the “lawn” area. We’re getting there. Not sure what we’ll do for the rest of the week, but you’re welcome to come along for the ride. Until then, as always~
Thanks for reading. 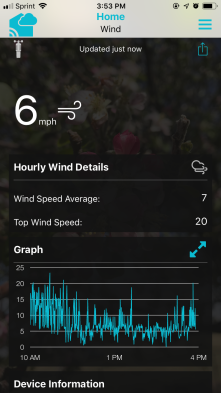 Fun Photo: Today’s fun photo was taken (illegally) on my way home from Bisbee. Don’t turn me in. I just couldn’t resist this neat shot of the mountains right behind the farm and the sun lighting the valley below. 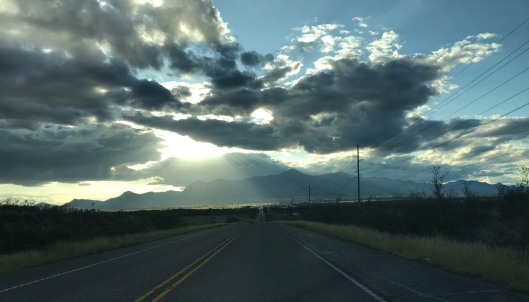