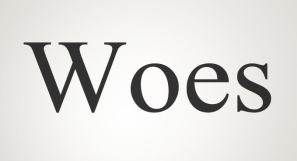 My mom and I speak on the phone every week. Lately, she’s been keeping me informed about all her garden successes. I’m just a little bit jealous. They’ve had so much more rain than normal this spring – it’s made mom’s plants all just take off. We’re more than a little bit behind on the garden front.

Our friends and neighbors, Elise and Lance, gifted us with some cucumber plants at the beginning of the summer – they were completely decimated within 3 days. Eaten by birds and bugs, I suppose.  Meanwhile, the plants I started from seed were doing their best to catch up. I planted them out and they seemed to be doing quite well. However, as of Sunday, here is how they are doing. 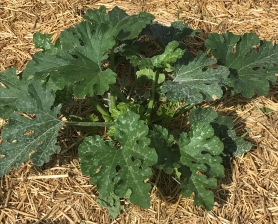 Great! This one is doing just fine. Starting to flower, hopefully putting on some type of fruit soon. (That’s another problem, I knocked over the growing flat and mixed up all the seedlings, so I’m not really sure now what I’ve got in the garden.) It’s doing so well, I’m just waiting for whatever is going to go wrong.

This one was planted at the same time, on the same day. It’s smaller, but doing very well. I’ve found a few squash beetles around the plants, not on them yet – so that white stuff you see is Diatomaceous Earth. What is DE? This definition is from Wikipedia: Diatomaceous earth consists of fossilized remains of diatoms, a type of hard-shelled protist. It is used as a filtration aid, mild abrasive in products including metal polishes and toothpaste, mechanical insecticide, absorbent for liquids, matting agent for coatings, reinforcing filler in plastics and rubber, anti-block in plastic films, porous support for chemical catalysts, cat litter, activator in blood clotting studies, a stabilizing component of dynamite, a thermal insulator, and a soil for potted plants and trees like bonsai. 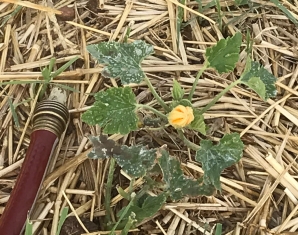 Then there is this little plant. Again, planted the same day. It is putting on buds, but hasn’t grown much at all. Now, I want you to know that all these plants are in the same type of soil; we built it when we made the circle garden. So, why do we have this discrepancy in growth? Your guess is as good as mine. I’m just hoping

that they all just don’e end up like the last and final plant. We think it was attacked by birds.. not sure, truly. Now, all that’s left is a crater that I kind of dug up looking for plant remnants.

Regardless, the others are still alive so I was happy. Then I took a close look at the tomato plants. LOOK!  Grrrr. Evil tomato worms. It was absolutely huge! It was so huge that the chickens weren’t even sure they wanted to eat it!

You can see them asking… “What the hecks she givin us? This no worm, it li’l monstor!” I tried to tell them that they were big dinosaurs and that they could eat little  monsters quite easily. When I left them, they were still discussing their options. I have no idea if they ate the worm or not. Silly little dinos.

Ok, I have one more woe to share, but I don’t have a photo of the infliction – only the hoped for cure. We have had an aphid infestation in our kale, cabbage and

broccoli. We tried spraying them down for a couple of days, but they were overwhelming! So, I ordered some ladybugs. They arrived through USPS just fine and we let them go during dusk. They say to do that because they’ll stick around; if you release them during the day – they just fly away. Here are a few of them, finding their night’s resting place on some of the kale. I think they’ll take care of our aphid problem quickly. I hope there are enough sources of other food as well so that they stay around for a while.

Those are my garden woes. They seem to be working out ok. Maybe once we figure everything out, we’ll be able to have a huge harvest 🙂 If that happens, you know there’ll be photos. Until then, as always~
Thanks for reading.