Today was kind of a sad day; we said goodbye to Mr. White, one of our Barred Rock chickens from the first batch of babies.  He was our first injury, and therefore an unplanned euthanasia.  I guess they are never planned.  We found him one night, unable to stand or walk, we thought he might have broken something – so we isolated him from the others, made sure he had food and water… helped him eat and drink, and kept him warm for a few days, but he continued to deteriorate.  Today we saw that he was no longer eating, and we didn’t want him to wither away slowly. He was not improving and was in some amount of pain.  Sue dispatched him with great care and he was calm.  So – we said goodbye to Mr. White and learned a few things along the way.

In other news… the new coop is well underway.  Brent and his crew: Andrew, Doug, and Ernesto (? I think) worked really hard to get the foundations form up the footings, and then pouring it on the Tuesday before Thanksgiving. Here are some action shots: 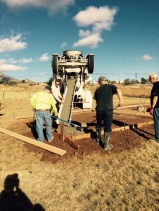 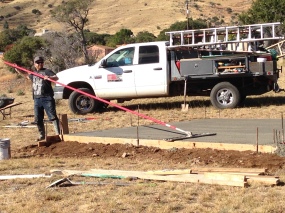 As you can see, this is going to be the Palais Royale of Chicken Coops!  It was a fun day watching them pour… they really hustled and were done by around 2pm, just as my parents were pulling in for the Thanksgiving Holiday.  We kept wetting down the pad as it cured throughout the weekend.  Tomorrow (11/29) they begin framing up the coup… they have dropped off the sticks already and they say they’ll have it done in about a week. We’ll keep posting photos of the progress on our Facebook Page WAAP2.

There are other projects that I’ll be writing about this week as well, so keep checking in! Until then, as always,
Thanks for reading!

Today’s weather: At 7:15 a.m. this morning it was 42°, the high was forecast as 56°, but I have no idea if we reached that.  It was clear and windy again today. Low tomorrow is supposed to be 29°, so we moved the citrus trees against the house and covered them with old mattress covers.  We’ll see if we can baby them through this winter until we get a warm winter space for them planned out.