WOW!  I can’t believe that December has already gone and, here we are, on the 2nd day of 2017 and I’m starting off the year already behind!  So many things were happening through the holidays, with both Wing and a Prayer and in our own personal lives that I let myself get distracted from the blog.  With this post, we’ll try to remedy that.

Ready to move in!

I suppose the biggest thing we did was complete the permanent coop and move the littles in to their own place. We didn’t have any of the permanent roosts in yet, but the weather was getting worse and worse and we wanted to get them out of the wind before we lost any more to exposure.  So, we put in some 2×4’s on 4×4 risers just for temporary sleeping quarters, line the floor with straw, put their feed and water in there on risers and plotted our night moves.  When you make big changes like that, you want to minimize the upset for the chickens. So~ we moved them under the cover of night.  We waited until they were all snuggled in for the night and just moved them two and three at a time.  Once they go to sleep, you can easily just reach in and pick them up.  They don’t fuss or anything.  We would open the top of the Chickshaw, I’d reach in and hand one or two to Sue, and then take one for myself… only one because the other hand had to hold up the top and then be free to latch it after. Then we just carried them over to the new coop.

One of the things I love about the littles is that they are so curious.  Once we moved them, I thought they would just settle down and go back to sleep, but they wanted to investigate every corner of their new digs.  They were pretty cute.  Eventually we let them be and they just settled down in the hay to sleep; nice and cozy warm.  In order to make sure they realized that this is their new place to be, we kept them in the coop a couple of days. Then we moved their fence enclosure around to the back door of the coop and gave them in and out privileges.
We had the guys frame in an old dog door for their private exit, but they were quite skeptical of it at first. It wasn’t what they were used to at all. We ended up taking all their food and water outside, giving them their favorite morning gruel in the feed bin right outside the door.  It was actually pretty funny.  They would take turns looking out the door and commenting, then electing to stay inside.  Finally, the littlest Buff, who has the most pluck (!) was the one to initiate the outings.  She took a look, turned around and chittered at the bigger guys and they started coming out.  Littlest chicken running the flock.  Now they come and go with no problems.

Now that they were in there, we needed to put the finishing

touches on their new home. Sue was sure that they needed to have some type of curtains over the nesting boxes, so she went all festive and purchased Christmas Dish Towels at the Dollar General and stapled them up! Very cute for a short term solution!  In the photo below, the curious have gathered to check out their Christmas hangings.

Sue then decided that they needed a roost and ladder to better access the boxes.  So she went about putting that all together.  It was installed the same day as the “curtains”, and again the littles gathered to watch the installation and kibitz amongst themselves at the wonder of it all.  I think they were probably saying “Oh my. Would you look at that!” and “Whatever will they think of next?”   Come on, say it like a chicken would~ you know you want to!
Well, what happened next was the installation of the roosts.  We measured and measured, and talked and talked about it.  Then Sue went and did it!  So, the roosts actually raise up so we can clean under them and the space allows for approximately 45 chickens total.  Sue says she over-engineered it, but I think it works great and the chickens have given it their seal of approval.

This was all completed by December 20th, which is a very good thing because the evening of the 24th and morning of the 25th, it snowed!  Our littles were safe and cozy warm in their hay filled coop. On Christmas morning, Sue was slated to play and sing at the 7:30 am service, so I stayed and did the morning chores. The littles refused to come out and be in that cold white stuff.  They decided they were snowed in for the day. But the biggies were not deterred at all. They came out and were scratching around as though they were old pros at this snow stuff.   It didn’t last that long anyway, it was mostly gone by the time we came home at noon.  Everyone survived and stayed safe. 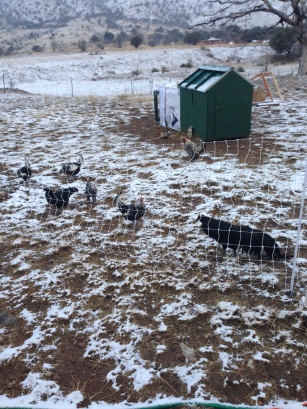 That’s a pretty long post, so we’ll let it go at that and I’ll continue the update tomorrow; hopefully.  As always,
Thanks for reading!

Today’s weather:  We had another cold night and morning.  When we got up at 5:30 this morning it was 25° and everything was absolutely frozen.  Sue hauled hot water out to the goats so she could melt their water enough for them to drink.  The chickens greatly appreciated their hot oatmeal today!  My phone says the high was 53° but I really can’t confirm that.  The overnight low is supposed to be 34° and the high should be around 62°.

Egg production: has changed a bit with the cooler temperatures.  We’ve been getting 1 to 2 eggs a day.   I’m still surprised that they are laying at all, what with the cold temperatures lately.  We must be raising some happy chickens!

1 thought on “Night Moves (and other happenings)”