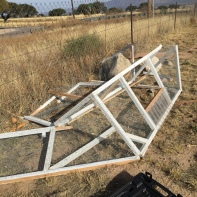 When we first were looking at this property, even though we visited it a few times, I don’t think we really realized how drastic the weather was going to be.  The temperatures do fluctuate some, but in general, it’s been pretty mild.  What has really surprised us is the wind! (I think I’ve said that a couple of times in this blog.) We seem to be in a wind vortex here, and it can be rather severe.  You see to the left what was left of our first Chicken Tractor that Sue made over the summer. This is what we used to house the littles when they were first big enough to be outside without a heat lamp.  It’s not a light weight object… it took two of us to move it… but here you see where it landed 50 yards from where it was, INSIDE the chicken run.  So, it was lifted off the ground, glanced across the top of my car (that could have been much worse), then lost some altitude and stopped this side of our fence.  Whew!  Our other little shade structure took flight during that same wind storm which happened before Christmas.  So, wind is something we contend with each day.
To help us divert, or slow, the wind in the future~ we have begun planting trees for a wind break.  We brought a few with us from California and I think some of those will go along our front fence where our drive way is, but the wind often comes from the south-east and right into our back porch.  So, Sue ordered 12 Deodar Cedar seedlings which we’ve planted along that side of the property.  Sue is researching trees, finding those that grow realtively quickly, are drought tolerant, are hardy for our zone, and slowly ordering a slew of them.  We might be impending our view, but the wind is just so incredibly desiccating that we have to be able to manage it somehow. 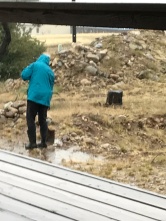 Another weather issue that we’re working with are the torrential rains. This photo is from New Year’s Day. That is Sue, out in a downpour, directing rain runoff to the “pond” that we’re keeping for water catchment. The main thing we want to do with all the rain that comes our way, is to keep it on the property as long as possible. If we’re not capturing it in the cistern, or in the rain tank, we’re trying to keep it in Bioswales or, as in this photo, direct it to water catchment basins that we’re keeping or creating on the property. If it isn’t filling up tree wells or Bioswales, it’s at least being kept on the property to sink back into the aqua-fir; 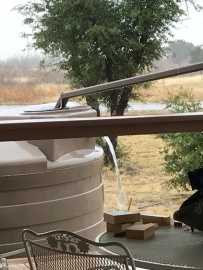 instead of running down the street into the gutters. Sue placed an 1800 gallon rainwater tank by the house, that is set up to capture half of the roof runoff and the patio cover runoff.  We’ve had two good downpours since she did that and it is already full! We’re already talking about adding something to the other side of the house and carport that will capture that water to be used as irrigation during the dry periods. The runoff that Sue is working with above, is actually the overflow from the rainwater tank…I tried to capture that in the photo to the right.  You can see the rain gutter going into the tank, and, in the middle of the photo you see the water just pouring out of the overflow valve. It was amazing how quickly it filled up! 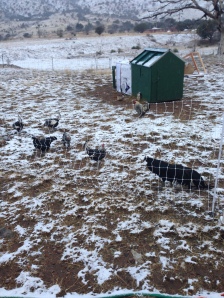 The other issue we’re learning to work with, and watch out for, is SNOW! Well, and freezing night temperatures. Sometimes the temperature fluctuation from day to night is 30° or more. Christmas Eve night and Christmas morning, we had incredibly frigid temperatures from a weather system that dusted us with snow. Didn’t seem to bother the Biggies much, but the Littles would not come out of the coop. However, by mid day we were back up into the high 50’s, all the snow had melted from our property and things just continued to warm up throughout the week. We’ve taken to watching the weather quite closely so that we know when to cover the citrus trees, and the few winter veggies that I planted. So far they’ve all come through OK. We even have a few limes on the tree still, and some very small green lemons. We’ve continued to harvest the Kale, and are watching our Cabbage and Broccoli grow bigger and bigger (see today’s Facebook Post for photos); the Spinach took a breather, but held on through the coldest months and now I’m waiting for a growth spurt! One of the real champions this winter was the Coriander (Cilantro) plant; I’ve cut it several times and it just continues to put out new growth. The Basil also overwintered, but I’m not sure it’s going to be much by spring… we’ll see.

It’s all a learning process and something new happens each and every day.  It is always interesting and often entertaining. We encourage any of you to make a trip and visit the area, there is so much to see and do here – we promise you’ll never get bored!  Just think on it!
Until then, as always,
Thanks for reading.

Today’s temps:  Low last night was 37°, but our high was 65°.  Strong, strong winds today – had to put up all the outside dog beds so they wouldn’t blow away!  Clouds came in during the afternoon. Over the next couple of days we’re supposed to cool down again and – perhaps – have some light rains on Saturday and Sunday.

Egg report: Only one little brown egg today.  One little white egg yesterday.  After I bragged that they were doing so well.  Maybe the winds put them off.  We’ll continue to keep track.