A couple of weeks ago, I was tickled to find out that the behavior we’ve always noted with chickens- having a hen or the rooster give vocal cues for good little tidbits they find- is actually called “tidbitting”. I thought I’d use it here as a title, because all I have for you today are tidbit updates. The first one is… our view from the back porch into Mexico. We’re hoping that those rain clouds come up the valley and give us some moisture. As I type this, the rain is now in front of that mountain range and perhaps heading in our direction. One thing is for certain, the thunder is getting more prevalent. Let’s take a look at what else has been going on.

Bumblefeet Thursday we performed the final ministrations on Maeve’s and the EE’s feet. For the past couple of weeks, we’ve just been keeping them clean, well antiboticed up, and wrapped against dirt. This week, when we took off the bandages, all we saw were nice healthy scabs; no pus, no kernels of infection, not at all tender to the touch.  Nice clean, soft little feet. Here’s a photo of Maeve’s foot after cleaning. They both should just go on to heal without any problems.  We’ll keep an eye on them, of course, for a while to make sure nothing else takes hold. Everyone’ else feet seem absolutely fine. (Having to unplug the computer now, because the lightening is all around us and it’s raining buckets!!! I have a few more minutes before my battery poops out – but I may not get this posted for a while this evening.)

Baking with our Produce Yesterday we made a Cobbler with some peaches from our little peach tree. It’s the first year that it’s been in the ground for any length of time. The first year, and it flowered! I thought, well they won’t make it through the winds. They did! Then it started setting fruit and I thought, they’ll never make it through June drop. They did! The birds started eating them, and Sue was worried that we wouldn’t be able to eat any of them, so – checked with the mom to see if she thought we could pick them while still green – we did. Got about a dozen. Put them in a paper bag to ripen, and about 6 were great. The others shriveled, and were still too green to use. So, we added 3 peaches from the store and used blue berries. It made a delicious cobbler. Yum! Next year, I’m getting some netting and we’ll see how well we do. 🙂

Growing Greens and Things  The rain has been a boon to all the growing things, native and otherwise. Our acorn squash has finally started to flourish, I was a little worried about it; kind of had a failure to thrive thing going on. It had only set one squash all season, but now the bush is huge and the flowers are going like gang busters. Our “winter” garden – I call it that because that’s when I planted everything – is really enjoying the

rain as well. The cabbage has decided that it might like to set some heads again. When I harvested in the spring, I just cut the heads off and left the plant in the ground. I left one in tact this year because it was way too small to bother harvesting, it’s doing quite well at the moment (top of photo). All of them had leaves like crazy, but now I think we can see little bitty heads 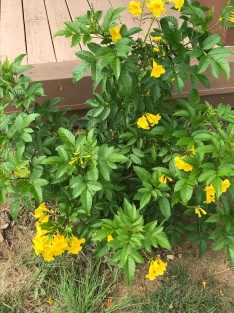 starting to form.  It’ll be interesting to see if they grow to their fruition.  In the left of the cabbage photo you can see the purple flowered plant – that’s a Russian Sage. It too has begun to flourish with the regular rain showers. It’ll be very hardy once it is established, its just getting them to that point that is sometimes tricky.  Also by the porch is an Arizona Yellow Bell bush. I was really afraid we lost it completely after the one very hard freeze we had this winter. There was nothing left but a couple of dead sticks coming out of the ground. But, to look at it now, you’d never know it was a little nothing in the spring.

I find all of these native flowers and plants quite interesting. We went to Oaks of the Wild West today to pick up our trees – but he was in Tucson at a plant sale, so we’ll catch up with him when he’s back in town (the place is only 8 minutes away from us). I think I’m going to take some photos of the native plants and flowers that we have coming up around us now and see if he can tell me what they are exactly. When I find out, I’ll do another update here. Until then, as always~
Thanks for reading! (Hey! I made it before my battery went out!)

Egg Report: We had 10 eggs yesterday, plus a faerie egg (see the post on our facebook page for a photo). Today we had an even 10.