“I really LOVE completing a project!” That was Sue’s end of the day quote today after we came in from hanging the newest set of nesting boxes in the chicken coop. I concur with that sentiment, actually. It’s always a good feeling when you complete something you’ve set out to do and then you stand back and look at it – and it looks great! Or at least it works, anyway. This project really came together.

This project was started, for one reason at least, because we had been collecting eggs with pecks in them. Well, and plus at least two instances of right out and out egg eating. There are several reasons why this occurs: 1) lack of protein in their diet can cause them to break open and eat eggs, 2) over crowding in the coop 3) over crowding in the nesting boxes. Well, we don’t believe they have a lack of protein in their diet – there are so many grasshoppers out right now they are eating them like crazy, and they always get a little left over canned cat food in the morning along with their dried meal worm treats. The coop is not over crowded as it was built to house 50 chickens and we only have 30 some at the moment. So that leaves crowded nesting boxes. We have noticed that the chickens sometimes wait in line on the ladder or the roosting bar outside the nesting boxes for their turn to lay. Lately, we’ve also been finding eggs in odd places – even outside. So, Sue decided to make 6 more nesting boxes for them. She purchased the wood on Monday and started building on Tuesday. Sent me the photo above around 9:30 this morning.

Later, around 1 or so, I let her know that I probably wouldn’t have to work as late as I thought and her response was, “Good. I will need your help getting this monstrosity into the coop!” That let me know that she was about done. When I got home, around 2:45, We quickly took care of the regular chores and proceeded to hang the new nesting boxes from the studs of the coop. It really didn’t take very long at all. We hauled it over there, over the fence – which is always tricky for me, and through the door. Sue had already installed some heavy duty corner brackets, so we were able to set it down on that. While she screwed the back into the studs, I just kind of helped take some of the weight. Easy peasy. Of course you know that we have to make it feel homey for the ladies. To do this we

added soft straw to the bottom of the boxes; the chickens make quite a nice little nest out of the straw, and also added privacy curtains. Do you remember the Christmas towels that Sue hung for the first set of boxes? They are still up and looking, well, Christmasy. However, it’s fall now, so of course the selection at the Dollar General is aptly themed. I would be trying to get all the same curtains, but Sue wanted to make sure the patterns and colors were different so that the chickens could tell the boxes apart. Does that matter? Not sure, but they certainly have the ability to tell patterns and colors way better than we do, so these should be perfect! Take a look and tell me what you think.
Over the next few weeks, we’ll see how they take to their new little nesting places and keep track of the pecked eggs. If our suspicions prove true, we’ll update you here! Until then~ as always,
Thanks for reading!

Today’s Weather: Unexpectedly, we had rain and hail today! Since we don’t have a rain gauge still, I can’t tell you how much – there were still some puddles on the road when I came home though. Hopefully this means we can still expect some much needed rain. It’s been almost two weeks and everything is already drying out quickly.

Cool Sighting: We have one bush in front of our porch by the steps, we’re not exactly sure what type it is, but the caterpillars sure were enjoying it. This week I saw several chrysalis’ on the leaves. Several were of the black and white variety – I counted 6 that I could see, and then the one little green guy. I think that’s pretty cool. Here are the photos. 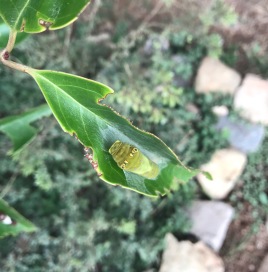 1 thought on “Quote of the Day”