Whenever we talk to my folks, they ask “How are things on the farm?” So here’s a blanket update on recent happenings.

A while ago, the bachelors were moved out to one of the pastures, they are live g I the recently restored chick-shaw. Still within an electrified fence- we have had some visits from coyotes recently so, good thing! They are the feasibility experiment. They seem to be doing well out there- they love all the grass hoppers and they’re getting along with each other, for the most part. It’s working so well, we’re thinking of putting the Cochins out on pasture when they are old enough and we have the right setup ready for them.

We did some night moves recently that we think went pretty well. We had Lady Grey on the littles side who had been injured a few months back. She seems to have made a full recovery and was missing her sisters on the other side. Last night, after everyone had settled down, we reintroduced her to the biggies’ side and think it is a happy reunion.

The other introduction was the baby Cochins to Maeve and Imen. Night before last we simply left the lower brooder door open so they could expand their horizons on their own. It worked ok until Lady Grey decided she wanted all their food and scared them into a corner! (Another good reason to re-introduce her to the biggies.) Sue shooed her out and made it so she couldn’t fit through the doorway, but the littles could get

in and out. Caught this photo as they were getting brave. Today the report was much better, Sue said she noticed that Maeve and Imen stayed outside mostly today, so the littles had run of the entire brooder side. This afternoon I was watching them investigate and saw a few of them eyeing the little door to the outside. I bet by tomorrow some brave soul will adventure out into the unknown. You just never know what’s gonna happen. PLUS~ tomorrow the newest littles come. We’ll definately need to show photos of them :).

More on the fine feathered friends… the doves are settling into their new place quite nicely. They enjoy being able to roost very high in the evening, and hanging out on the tree branch during the day or enjoying being on the ground in actual dirt. We’re not sure if they ever had that experience before; when Sue picked them up they were in an enclosure that had a wire bottom. It may be that we 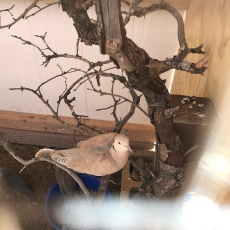 end up lining the bottom with straw, just for ease of cleaning, but we thought this might be an interesting time for them at first. They definitely are sweet little things and it is fun to hear them cooing when things are still and quiet outside.  So, I guess this ends the farm update. There’s nothing much new with the goats… maybe we’ll check in on them next time.
Until then, as always~
Thanks for reading!

Cool Sighting:  I hadn’t seen one of these guys for almost 15 years! In high school we used to collect them because we would be able to get extra credit in Mr. Beniaga’s Life Sciences class for bringing in Walking Sticks. You could really turn that into a lucrative side business if you lived in an area that had a lot of them! Not that I did that, just saying that one could. This guy was hanging out on our kitchen window a few nights ago. They mostly eat leaves so not horrible to have around. Though, I guess in some areas they are a problem when there are large outbreaks. I’ve only seen two since I’ve been here, so I don’t think we’re in danger of losing our oak trees. Grasshoppers seem to be more of a problem than Mr. Walking Stick here.