Chicken? Yep, chicken. We have an egg sucker – or rather an egg eater – in need of a 12 step program to help with her addiction. We’ve been trying to catch her in the act, or figure out who the culprit is, for weeks now. We have an idea, but no proof. We tried holding an intervention, but none of the chickens were willing to say anything~ so that was a no go. Many people are surprised to hear that chickens really do like eggs. – They also like to eat cooked chicken, but that’s another story. – Most of the time, egg eating starts innocently enough; an egg accidentally gets broken in the nest and they get a taste for it, then it becomes a habit. There are also other reasons that chickens may start feel compelled to eat eggs, so we’ve taken great pains to make sure these do not apply to our hens. 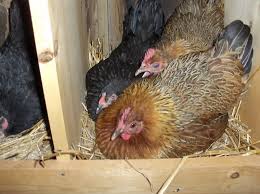 over used nesting box (not our coop, not our chickens)

n general, it’s said that you need one nesting box for every 4 or 5 chickens, because if they get over used then more accidental breaks will happen, giving them more opportunities to become addicted. We have so many nesting boxes for them to utilize, at different levels and on the floor, inside the walls – though I think they’re over that now – that this is not a problem for our hens. Yet they will still lay on the floor in the corners, or even out in the middle of the coop sometimes. Regardless, overcrowded nesting boxes is not an issue. Whoever it is cannot use that as an excuse. 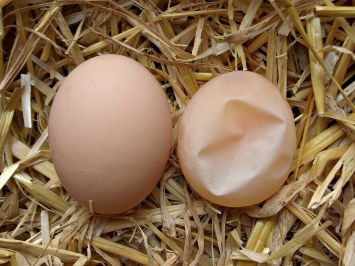 Another reason chickens will begin to eat eggs is that they are not getting enough calcium in their diet. As you can imagine, it takes a great deal of calcium to continually make hard shelled eggs. When they don’t have it, you can sometimes get soft shelled eggs like the one pictured here. This isn’t the only reason this happens, but it can be a sign of a low calcium diet. Here, we make calcium accessible to the chickens all the time. There are two free feed areas, one inside the coop and one outside the coop, specifically for calcium. We also add egg shells to their morning grains and greens so that they are continually receiving extra calcium if they need it. Ducks also need to have this extra source of calcium – their shells are so hard and thick it is amazing!  Low calcium cannot be used as an excuse.

Another reason that I’ve recently ran across is that they don’t have access to enough water. Maybe your coop only has one watering station and a hen is really low on the pecking order and is being kept away from the source. So she is forced to turn to egg eating to get enough water. Well, for us, water – again – cannot be the issue. We have watering stations everywhere. PLUS, we have two pools for the ducks that are changed every evening and filled with fresh water. Our desert chickens are water rich. Really! Not a good reason. 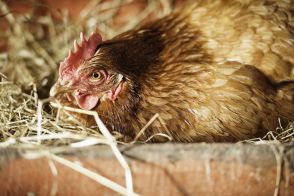 This is getting closer to the reason we think we have an egg eater. Broodiness. A really broody hen can monopolize a nesting box, or take over other boxes that the rest of the flock has been using. She can break eggs in her zeal to obtain a box, and then begin eating them. OR if she refuses to get down from the nesting boxes, she may turn to egg eating to sustain herself.  THIS is what we think is happening. We have a very broody Buff who simply refuses to leave. She moves from box to box, taking over the eggs that others have laid. We just don’t have proof of the eating… we only see the aftermath. If we are correct, what we’re hoping is that this will stop after the broody period is over. What we’ve been trying to do is pick up the eggs two or three times a day so as to minimize the opportunities for eating. They suggest “breaking” the broody hen, but that entails continually moving them off the nest, and we’re just not out there enough to make that work. If we can catch her in the act, we will simply separate her for a time, in a cat carrier or something, so she can go cold turkey. Supposedly, it only takes a few days of no egg eating to break the habit. It is said chickens have a very short memory. (Not too sure about that.) Some people say that blowing out an egg and replacing the insides with mustard or hot sauce will help to cure them, but they just can’t taste those enough to make a difference. – We’ve talked about that a few times recently. – We’ll just continue to be vigilant! When we catch them, we’ll post their photo! Until then, as always~
Thanks for reading!

Today’s Weather: Still quite warm during the day, but starting to cool off during the night. This morning it was 55° when I left for work around 7:30 this morning. Right now, at 6:10 p.m. it is 68°. High today was 81°. Low tonight is supposed to be 44°. Only sunshine in the forecast, wishing for rain. 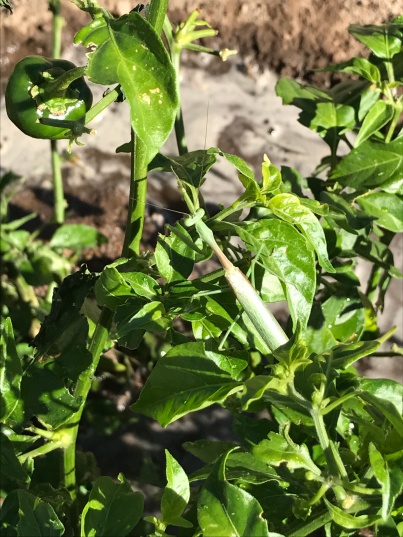