The weekend is here… seems like such a long, short week. Sometimes this last week of the year gets all muddled; I posted a meme yesterday that said something like “Welcome to that time between Christmas and New Year, when you don’t know what day it is, who you are, or what you’re supposed to be doing.” That’s kind of how I’ve been this week.  Sue has been out of sorts as well, but that never stops her from accomplishing tasks around the farm. 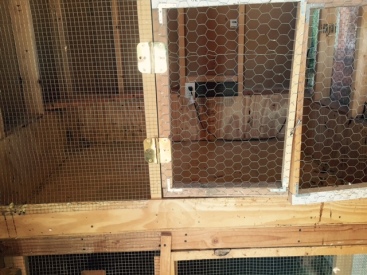 Wednesday saw the Banties in their tractor all day long – poor babies, but they seemed to make the most of it; had fun nesting around in there. Sue’s big project that day was cleaning out the top of the brooder. I think I said something about that on Wednesday, but that was such a long time ago, I can’t rightly remember.  She said it was full of wasted food from the babies. She dumped somewhere around 10, 5 gallon bucket loads over the fence for the wild critters. It’s hard to believe that this little space would hold so much stuff! But it does. It’s all cleaned out now and she shut the doors to keep the layers out of there. We’re trying to encourage them to go out the door! 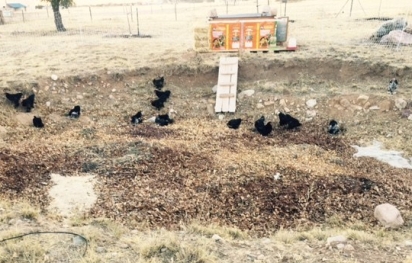 Thursday came and liberated the Banties from their tractor confinement. At first they weren’t too sure about their new surroundings, but by the afternoon, they were out exploring the leaf pond, the rock pile, and the other areas. They were having a good ol’ time rustling around in the leaves. Today, Sue got a call from the 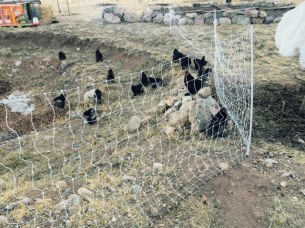 County, they had 11 bags of leaves for her to pick up! She said that the chickens looked askance at them for a good long while before venturing back in. “Orangutans are skeptical of changes in their cages.” (At the Zoo – Simon & Garfunkel)  Tonight they are congregated around the rock pile as the sun sets behind the mountain. Sue’s theory is that they like the warmth, since it’s cooling off rather quickly.  Could be… now they are slowly making their way back to the tractor for the evening.  They’ll be in there ready to bed down in the next 15 minutes or so. Good little chickens. 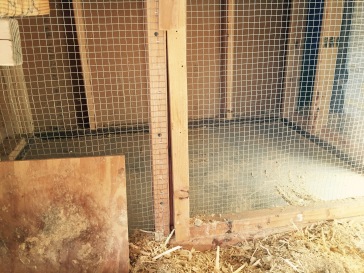 Sue took the morning Thursday to clean out the bottom brooder.  She dumped just as much crude from there as well. Plus, she uncovered an egg. We had no way of knowing how long it had been there, so we did the float test.  Almost jumped out of the water, it was so old. So, we burned it at the stake (you know, like witches who would float… never mind) — I just threw it into the compost pile, making sure that it broke so as not to continue to ripen. It didn’t smell, so I guess it was too old.  Anyway, now the bottom is all cleaned and closed off from the littles as well. We might need to clean out the rest of this side as there is probably a ton of food mixed in with the straw too.  Plus there were a lot of birds on the brooder side and a couple of days where they hardly went out side, so there’s a lot of manure in there as well. We’ll see how it smells in a few days. 🙂 That’s about it… we’ll be signing off for the Holiday weekend. We’ll be back after the 2nd. Until then, we wish you and yours a most wonderful New Year, and – as always~
Thanks for reading!

Today’s Weather: Unseasonably warm. 76° today. Right now, at 5:22 p.m., it is 69°, but it felt cooler than that to me. The overnight low will be around 35°. Tonight’s sunset has already happened, don’t know what time. Sunrise tomorrow will be about 7:19.

Egg Report: We had 13 chicken eggs yesterday. Today we had 7 chicken eggs and 1 duck. Numbers vary widely. Actually bought eggs today for us to eat so that we can be sure to have fresh eggs for our customers! Can’t wait for the days to lengthen and be warmer for longer periods of time.