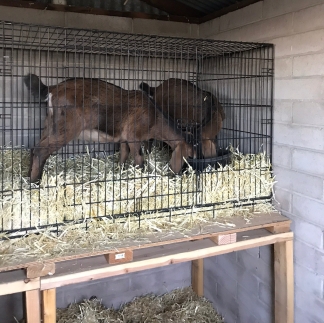 …friday is my favorite day.” Yes, I know, I’m running behind quite a bit today. I took the time to fill a couple goals – a little out of order, but I can rectify that tomorrow. No worries. The big goal for today was to clean out the goat babies’ crate and put fresh straw in there.  I had been adding to it, for that deep litter method, but it was kinda rank. They pee a lot! So, cleaned it all out and then put all fresh new hay in there. Also put some new on the shed floor as well as Taco George has been kind of compacting it. The babes are beginning to realize that they can use the ramp to get up there fast! So when I was adding the new hay the were all up in my face playing. It was really cute, but a bit frustrating. They are so friendly and playful it’s been quite fun. Taco George likes them too, but not when they hog all of the attentions. I just make sure to give him hugs and loves to. He’s a happy boy.

That took a bit of time, then I also cleaned out their water trough. It’s been so windy here the last few days… their bucket had a ton of straw floating in it and was turning that interesting shade of green which means it needs a scrubbing. Since I was already covered in hay, I decided to go ahead and add hay to Duck Duck’s crate. I should have done the white chicken’s as well, but didn’t even think about it! The white chicken is ill, but she is still feisty and makes a bit of a mess in her crate scratching around and stuff.

Sometimes she spills her food all over. Imen, the banty who is being given a rest from the rooster, also likes to spill her food all over. She gets a certain amount in the morning and we make her clean it up… believe me, she is not going to bed hungry. She’s doing well in there, enjoying her respite. Started laying eggs again. Never tries to get out. I think she knows she’s got a pretty sweet deal. Nice little vacation!
The one who wasn’t having such a good time was the escapee we put in the brooder down below to keep her from jumping the fence. She, too, was getting too much attention from the rooster. She was out daily. I even trimmed her wing and she still managed to get out. So we put her up for  a while to give her – and us – a rest. Well, this morning she planned a sneak attack and escape. I guess attack isn’t really the right word, maybe charge.  While I was crouched down and reaching in to replace her water, she used my arm as a ramp and ran/flew up to my shoulder and out. It took place so fast, all I could do was say “No!” and it was too late. I guess she was done with her vacation. She didn’t jump the fence today and I didn’t notice the rooster being as fixated on her as before.  Guess that’s ok.

Other than these two extra things, its been rather normal today. Sue has been texting me little tidbits now and again and e-mailing photos. I don’t really have enough info to be reporting on that for her, so I’m hoping that she’ll do a Special Report for us when she gets back. Until then, as always~
Thanks for reading!

Today’s Weather: We finally received a break from the wind today – thank you, God! Yesterday was so bad. We also had horrible dust winds. Why does the wind sometimes pick up dust and not other times? We were upwards of 50 mph yesterday, yuck. Today was quite a bit cooler – high was 78° and right now at 8:51 p.m. it is 53°. Overnight low will be around 45°. Sunny tomorrow!