Midweek roundup! Well, update anyway. I had promised some photos of the RCW because Sue had been working so hard to get it completed. The goal is still to get it out in the field this weekend with the chickens out there and the fence up. Here are a couple of photos, inside and out! Sue isn’t really sure of about the Fire Engine red (called “Safety Red” on the cans) but i think it’s GREAT! And the inside looks amazing as well. She and Dustin are adding another couple of window on each side for

as much  ventilation as possible, because it is getting pretty hot in there at this point in time. Want to make sure as much breeze comes through as possible. The flashing looks great along the bottom, don’t you think? Looks so spiffy and clean. Also – love the red ramp!!! “High ceilings and low floors.” Trying to decide what we should paint on it for the decoration portion. Do you remember that at first I wanted to decorate it like a Romney caravan wagon – that’s why I call it the Romney Chicken Wagon… but lately I’ve been leaning more to something a bit more modern. I mentioned the huge sunflower I envisioned immediately when Sue sent texted me a photo of the first coat of red. A few days ago I was thinking I could maybe do a fun chicken head on one side…  So, this is what I’m talking about:

Which are your favorites? Or what would you like to see? I kinda like the sassy hen on the white background above… something like that would be funny. Maybe we should hire Caylor Nuth! (let’s see if she responds to that :).)   If you have an idea of what to paint on the wagon, add it to the comments, or message me. Maybe we should have some type of contest. I’m open to ideas.  All right, I’ve wasted a lot of time trying to find images of the painting that I had in mind and I can’t find it anywhere. So, let’s leave this train of thought and go on to other things.

What else is going on? Well, I’m sad to say that our little Banty Rooster, Mister Mister, passed a couple of days after Mr. Longleggs. We seem to be having difficulty keeping roosters around and I’m not really sure why.  We’ll have to think about ordering some I guess. We have two right now, one Banty and one with the Oldies – I can’t remember what he is exactly. We’re trying to keep them going for a while. 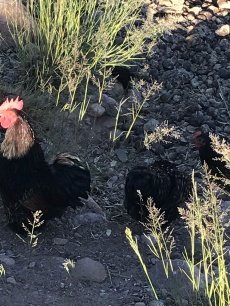 Our little banty chicken is growing up and becoming more and more adventurous. He’s really quite smart actually – whenever anything big and scary gets near, he either runs under the closest adult, even the rooster, or he hides in the little tufts of grass that are near, which always makes it a bit difficult to get a photo. Here is my latest attempt- can you find his little black bottom hiding amongst the grasses? He’s a quick kid, but still sticks close to his three mammas. We were so lucky that the flock all just decided to tolerate this chick… so many things could have gone wrong, but they are all just getting along with the youngster just fine.  Now we have one of The Three Sisters, in the oldie group – sitting on a few eggs to see if she can hatch anything.  If something comes of that we will definitely put them in a brooder so they don’t have any problems.  Can’t wait to see if we get some more chicks from her.  It would really be great if we could identify some chickens that will truly sit eggs, that way we can begin to replenish our own flock.

I was listening to the TED Radio Hour about The Meaning of Work and the speaker, Margaret Heffernan, talked about an experiment that was done using two flocks of chickens. One was left alone, had all types of chickens – not all the best, not all the worst, just a regular group of chickens, they were left to hatch if they wanted, or not – just continue along on their own. The other group consisted of the strongest, best of breed, great egg laying chickens; all had the best traits of their particular breed. The eggs that they were allowed to hatch were picked from the best chickens, etc.  Both groups were allowed to go out 6 generations. At the end of the experiment, the flock that had been left alone to do what they wanted and hatch whatever, was still strong and viable, still laying a goodly amount of eggs and  producing great offspring. The other flock, the ones made up only of the best, picked on each other so much there were only three remaining. I’m not sure exactly what it teaches us about work, but about chickens, I’d say that – when they are left alone to do what chickens do on their own, they are stronger than when we to over control them. I don’t know…. that’s kinda what I take away from that. Thought it was interesting. Take a listen and tell me what you think. I’d be interested in your opinions. That’s it for today, I guess. Friday will be another day. Until then, as always~
Thanks for reading!

Today’s Weather: We seem to be well into the summer heat. I know it isn’t officially summer until June 21st, but it sure feels like it here in the extreme southeastern mountains of Arizona. It is 6:31 p.m. right now and the weather station is telling me it is 99° out there, but feels like 94° – I suppose because of  the nice evening breeze.  There are wispy clouds in the sky, but no chance of rain.