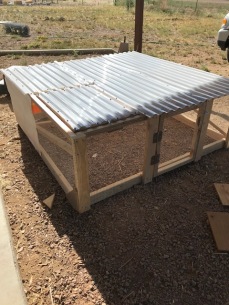 Here we are, back to normal days. At least as far as projects are concerned. It’s been rather an “everyday” kind of Monday.  Just another “day in the life….” Sue has all but completed the newest chicken tractor. Just needs a couple of handles and things that allow us to pick it up and move it around. I like this design that she’s been using recently. Has a smaller opening on top that we can use to get the food and water out of, the nesting box in the back with another hatch for access, and then the door in the front that lets the chickens in and out. There is also a roost across the middle, inside, for when they want to get up off the ground. All around solid little tractor. We should be able to move this one quite easily as it’s a couple feet smaller than the most recent one she built (I mentioned that already, right? – Sometimes I forget these things.) So chalk that up as completed.

Other than that, it’s just been a day most like any other. On a daily basis the chores are done (chickens, and other birds, goats, dogs and cats), watering is seen to, care for the sick or injured is given, and eggs are collected. Normal day. Lately, I’ve been thinking about rearranging my work schedule so that I can have some mornings here, which might give us time to work together on some projects that need attention, but keep getting postponed. If I go in later, and work until the regular work day ends – 5 or so – then that could give me a solid 2-3 hours in the morning, when it’s cooler, and we might be able to focus on the orchard, the garden and other such activities, things that it might take two or more people to complete. Saturdays were the days we tried to cram everything in, and then when I started heading out to the Farmers’ Market, it took a huge chunk out of the day. Now I’m not having to do that so much, since we’ve been taking eggs to Ecoasis – even though I do enjoy being at the market and making other connections, after all, that’s how we got together with Tom, the baker, and the Ecoasis store in the first place, it doesn’t leave that much time on the weekend. Anyway, we’ll test it out and see if it works any better. 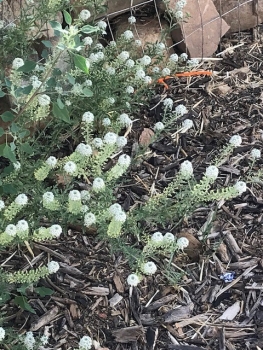 Here’s something that maybe someone can help me with. I’ve been trying to identify this wild flower that we have growing everywhere. When it first came up, I thought it was yarrow, but instead of the flowers being in a flat cluster, they became columnar over time. Now I think it may be some type of desert alyssum, but the only photos I can find of that show yellow flowers. I like leaving them to grow because it makes a great grown cover and the flowers don’t make stickers of any sort. If you think you know what this is, could you let me know by leaving a comment below. I’ve spent a good deal of time combing the web to find out what it is, but haven’t run into anything. I spent some time today on the Southeastern Arizona Wildflowers and Plants website today, but didn’t run across anything in the “white flowers” area that looks like this. It’s quite a nice website though.  Anyway – help a girl out, if you can. I’ll let you know if I run across the name as well. Until then, as always~
Thanks for reading!

Today’s Weather: For the great portion of today, it was rather mild. Then, around 2:30 the temperature just shot up to 103°, now it’s coming back down as the evening comes on and the clouds come over. Nice breeze which could turn into a wind at any moment. Currently at 6:30 p.m., it is 91° with 22% humidity we have a 20% chance of rain, which generally means it’ll rain around us, just not on us. We have a chance of thunder showers all this week through Monday. That would be GREAT!