As the days grow shorter and the egg production begins to decline, people have been asking, “Well, what else is there for you to do?” I think I say this a great deal in the blog – or I used to; there is never an end to what needs to be done on the farm. We do a heck of a lot of maintenance, all the time – but especially during the slower months.  After the fall and winter maintenance, then comes Spring cleaning… just like in your home. 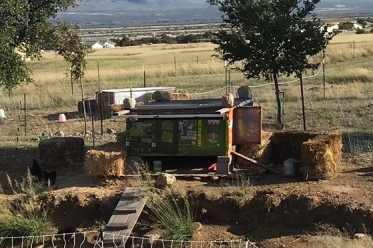 This Saturday we spent the morning working on the older Banty’s enclosure. The straw bales that had been around their little coop were over a year old, and they were starting to deteriorate quite badly. Sue had earlier purchased 5 new bales of straw; we were able to preposition them to just outside the fence area and then move the old bales out of the way. We dropped a section of the fence and rolled the bales in, then we placed the new bales around the coop. The reason we want to keep them around the bottom of the coop is to provide a type of wind break which will help in keeping the coop from getting blown around by the high winds.  It also give the chickens a sheltered, or covered, patio to hang out in and scamper away from any hawks that may be thinking of an easy dinner.  We also gave them a little sheltered area in front of their door, using a couple of the old bales, that will act as a wind break as well. We didn’t remove the old bales completely because the chickens like to scratch at them and search for bugs – of which there were many.  Prior to placing the new bales, the patio underneath was cleaned of old straw, food and poop. So we feel that they’re good to go for the winter.

After the heavy lifting was completed. We also took some time to weed wack under the fencing, because the more vegetation that touches electrical lines, the more it grounds out – making it rather ineffectual. As we went along, we stretched the fence out a bit, to keep it off of the ground, and moved it away from some of the rocks at the top, then pulled further out a bit down the hill. Over all, this gave the chickens a few more feet of “lawn” and took away some of the just plain dirt and rock areas.  This longer shot of the enclosure may give you some idea. The area to the left, inside the white electrical fencing, is what I refer to as “lawn” and the area to the right, where you can see the fence dipping into the leaf pond, is what had become mostly dirt and rocks. They seem quite happy with the changes and have notified us that they will be continuing their lease for another year. 🙂

The other biggest news, I guess, is that all the littles finally made it out of the coop and into the light of day! Sue caught them outside one morning, enjoying their food. They are still quite a bit skittish and will run inside at the slightest change in weather, any unauthorized air traffic – which includes, to them, doves, finches, or flycatchers – traffic noise, and/or dogs barking any where in the neighborhood. Silly littles. They are, however, getting somewhat used to us walking amongst them. I also think that the two hens (Leggs, and Booty) who are convalescing in separate areas, have been enjoying the company of the smaller hens. OH! There is a possibility that our “free fancy straight run” is a Hamburg Rooster. Sue has caught him crowing and he looks exactly like The Three Sisters, which are Hamburgs.

That’s rather all the news since the weekend. We’re gearing up for the Halloween Week and have picked out costumes for all the chickens. We’re going with a barn yard theme this year. I’ve been sewing my fingers off to dress them up! A few cows, some pigs, goats, lobsters – you name it, we’ve got it. Just kidding!!! We DO NOT dress up our chickens – ever. And… THEY DO NOT NEED SWEATERS! I only briefly thought I’d need to knit a sweater when Nudie Booty was almost completely nude and I knew we’d be getting cold soon. Then, after she was put by herself in a brooder and started growing

feathers back so well… I nixed the idea licketly plicketly. Here’s a very recent photo showing her with most of her feathers in. You can see some spots on her neck that have new growth that hasn’t lost the sheath around it yet, and her tail feathers are all still quite short, she looks a bit disheveled… but over all she is doing quite marvelously.  You can look back in the posts to see how bad she had gotten before we moved her to solitary and track the

improvement over time. We’re really quite pleased with her progress. Now, if we ever put costumes or clothes, of any kind, on the chickens we won’t be able to stop ourselves from sharing photos… but do not hold your breath on that one! Until Halloween then, as always~
Thanks for reading!