…when you can reuse??? It’s really a part of the tenants of Permaculture. I think it could fall into several places on the wheel: ethics, energy, or may be even climate. Regardless, it is one of the things we try to do as much as possible. We keep a stock pile of those items that we feel we will be able to reuse; wood, roofing materials, siding, welded or chicken wire… that sort of thing. We are keeping them in an area we visit any time we have a new project. We’ve started one recently, but it’s more of a morphing project than a build from scratch sort of thing. I’ve alluded it to it several times recently and now I can share some photos of it with you. I’d like to say that I was waiting to give you some good photos, so I didn’t blog until tonight, but the truth is, I completely forgot it was Friday.  The holidays really throw me off! 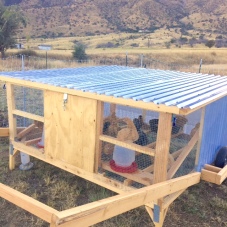 Vicente  and his two girls have been living in the original chick-shaw that Sue rebuilt a couple of times after it sustained major damage in wind storm related accidents. The photo on the right shows what it looked like when it was originally put to use in October of 2016. It has housed so many birds since this, and now it is being re-purposed to house many more. The last time it was toppled – when it was empty, don’t worry – the legs were bent, or completely snapped off, the housing which keeps the wheels on broke so it was very difficult to 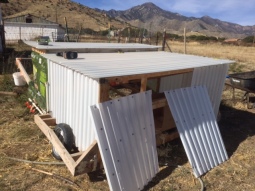 move where we needed it. Yesterday it took one final ride, in this incarnation, to where we would be working on it for the next couple of days. Dustin and Sue were able to half drag, half push it up close to the goat pen where we’re making it into a more permanent home for Vicente and his girls. Sue started taking it apart until we were left only with the main frame, the wood on the top, which is now the side, and some of the welded wire. We saved all 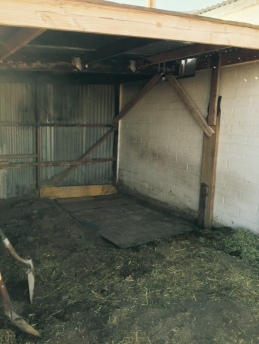 of the plastic paneling and removed the chicken wire that was on the bottom. Taking it apart didn’t take as long as it did for Sue to make it originally; she was rather disgusted at that. We were mostly done with that yesterday. The other part of the day was spent finally finishing the digging out of the lean-to by the goats’ house. The lean-to roof actually comes down away from their house at an angle, so the ground had to be dug down enough to fit the six foot height of the coop. Dustin also helped to create anchoring joists for the wall, so that we could attach the coop to something and keep it upright for when the goats try to jump on it… ’cause they will! Dustin and Sue did all of that while I cleaned out the top brooder and readied it for 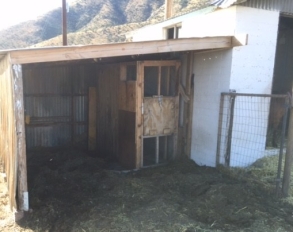 Vicente and his girls as they’d be without a coop for a few days until we get everything ready. Today Sue and I did some finishing touches prior to moving it into the lean to. Getting it in place was a struggle, because it was still quite heavy. Sue came up with the ancient Egyptian way of moving it on cylinders… we happened to have some metal pipes that are for another project, so she made a pathway with them and the coop rolled along on top of them. We ended up having to dig out the area right in front of the coop so it would fit under that first beam. You can see the dirt is rather roughened up – this was taken after we mostly had all the dirt back… we didn’t want to leave a ditch in front that would only collect water and funnel it into coop. Bad news. Anyway, that’s where we had to leave it today. Sue needs to cut a couple of boards for roosts, we want to add some dirt back into the floor, and also to add chicken wire in some areas that could allow baddies in. After that, we’ll be able to move Vicente and his girls to their new home. We’ll add a few new girls in there as well.

Please keep in mind, this is just their place of roosting. They will only go in there at night and during the day they will have the entire area with the goats to roam around in and eat the bugs and grubs and turn the soil… they will LOVE it! We’ll keep you posted on our progress. Until then, as always~
Thank you for reading!

Today’s Weather: It was a beautiful day, if a little breezy. High was 72° and really quite nice if you were in a protected area, away from the wind. Started off chilly, but was 44° by the time the sun came up and we were out doing chores. Currently, at 8:05 p.m., it is 50° with 42% humidity. Supposed to be cooler tomorrow, but clear and sunny. Overnight low is predicted to be 32°. We covered up the garden, tomatoes, and the citrus trees.

Egg Report: So – I think I’m going to stop reporting that we’re not getting any eggs from the goose or the ducks. When they start laying again, I’ll start reporting on them. So, for Thursday we had 14 chicken, Friday 15 chicken, and Saturday we had 13 chicken. I just want it iterate that those high numbers are due to the Banty hens being stellar layers. We are so low on eggs this week that I’m not selling any to Tom the baker, we’ll wait until next week when we can get him a significant number of eggs.

1 thought on “why recycle…”