Last Saturday was the day we had set aside to move the RCW. I had mentioned this was an interesting, if difficult, process and I’d take some photos of the more interesting segments. You know, when you have plans they never really go the way you think they should. I didn’t take any video, and I kept forgetting to take photos until after the fact; but I still have a fun fact to share with you. It’s about the most difficult way to thread the needle.

Let me show you this photo of the RCW. Can you tell me what’s wrong with this picture? Then, can you now figure out what I mean when I talk about “threading the needle”? Fun fact: The tent trailer that Sue converted into the RCW was quite old, from the early 80’s I think and had been sitting out in the weather, unprotected, for a number of years. So, when it came time to move the RCW, attach it to Sue’s truck hitch, they couldn’t get the coupler to close around the ball. Took a whole lot of WD40 and a whole lot of cajoling (probably some curse words – but I wasn’t there, so can only imagine) before they could get it attached. Once it was attached, they were afraid that – if they could even 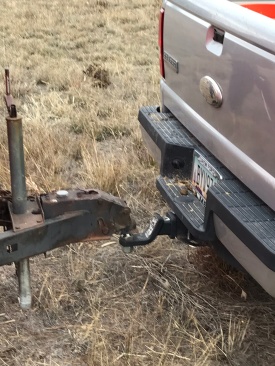 get it to come off the at all – they’d never be able to get it back on. So, instead, the ball mount remains attached to the trailer coupler and every time we move the RCW we have to thread that back into the receiver hitch. Now, let me tell you – this is nothing to scoff at! It takes precision driving and someone to give the best directional signals in the world! (I give the directions 🙂 ) Sue has to have an an easy foot on the gas and brake because – see that pin? We still have to line up the holes on the ball mount and receiver hitch to get that hitch pin in there.

We always seem to be able to do it, and we’re getting better at it each time. I’ll have to get some type of Go-Pro and video it the next time we move. It’s really funny to watch, I’m sure. Anyway, we got it hooked up and moved it to the next fresh patch of pasture. We move it, then

we put the fence up, Sue weed wacks the taller weeds that could cause interference with the fence, (it’s sensitive, don’t you know, and can ground out easily), then we call it macaroni. It usually takes about about an hour and a half to do all this, depending on how easily the fence goes up. This time it did take us a little longer because there was the changing out of the wire that we had to contend with. 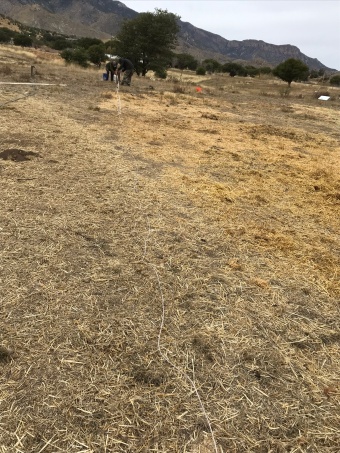 his is the farthest the fence has ever been set up from the transformer… thus the reason for talking to our friends about what was needed. We decided that we might as well measure out enough line to take us to the furthest corner that the RCW would be placed in the pasture, that way we’d only have to change the wire this once. This is the view from the fence to the transformer where Sue and Dustin are working to wire it up. You can see it’s crossing areas of the pasture where the chickens have already been. This final photo shows exactly how much wire we

I suppose that this has been rather dry, but there is some humor involved. Everyday we laugh at something; isn’t that what makes it all worth while? The joy?  Speaking of joy… my folks are coming this week and that’s going to make for a joyful Christmas season! We’ll try to share a bit of our (mis)adventures with you. Until then, as always~
Thanks for reading!

Today’s Weather: We were a bit warmer today than over the weekend. We did end up getting a nice rain shower on Sunday, lasted a while and gave all the plants a nice drink. Was only a bit chilly this morning when I left at around 6:45 – 42° if I remember correctly. Hit into the low 60’s today. Currently, at 7:59 p.m., it is 49° with 71% humidity and a 10% chance of rain right now, going up to 90% chance later this evening and even the possibility of some thunderstorms around 9pm. Looks like we’re clearing for the rest of the week and into the weekend. Should be a nice day for Christmas!

Egg Report: Saturday – 16 chicken.  Sunday – 16 chicken.  Monday – 17 chicken. Sue put new straw into the coop today and she feels that that accounts for the up tick in eggs today. Who really knows what makes a chicken happy? I think they’re rather fickle myself. 🙂