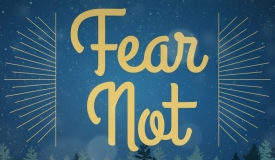 We’ve just come through Advent and Christmas-tide… a time when you hear a great deal from the angels. Generally beginning with, “Fear not!” Nothing like a heavenly body suddenly appearing and admonishing you to “fear not” to get your heart racing. Not from fear, obviously. It’s something that we try to practice though, not fearing. Trusting that things will go the way they should/need to. “Things” are not always in our hands and we have learned to not be so concerned with the outcome. Fear can paralyze you, that I know first hand. So, we’re actively stepping out in faith on a regular basis. Yes, we step out in faith, but – honestly – we still worry. The worry isn’t necessarily huge, but even a snigglette of worry can have you questioning yourself. This weekend we were successful in tackling the fear in a couple of accounts, and not so much in another. That’s right, trying to stay true here. 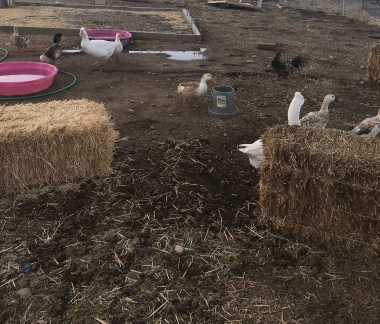 First fear that was brought to naught – fear of the need to shepherd. One of the tasks we really wanted to get in hand this weekend was moving Octave, Cheese and the Quackers. If I’m being honest here, we were afraid to do this. Not afraid of the birds, but afraid of losing the birds, or of hurting the birds. Octave is a pretty big goose and, while we’ve been making friends with him lately, we didn’t want to put him in a position where he thought he had to defend himself. We also didn’t want to be chasing him, or the ducks, around and around the pen for fear of hurting or getting them too riled up. First we tried to get them from inside their little tractor, but Octave was really freaked about that; Sue was afraid he’d hurt himself, I was afraid he’d lash out at her or me. That was the night that we abandoned the thought. We figured that there wasn’t any way we were going to be able to pick them up and move them. We were afraid that the only thing to be done was to shepherd them from one spot to the next. We’d try the following night. The next night it was way too windy – I was afraid that, if we weren’t able to hold on to them, or if they decided to try to fly, we’d loose them forever. Shepherding would need to wait for a calm evening. Finally, we had a calm day and we decided that we’d try to shepherd them. We were getting ready to take down a part of the gate so we could herd them out, but Sue found that we needed a pair of scissors to cut the tie at the bottom (it’s complicated). While she went to the house to get the scissors, I stayed in with the birds. Octave came over to investigate my new Sloggers (one of my many favorite Christmas gifts, btw) and while he was distracted by the colorful shoes, I just reached down and picked him up. Not sure that I’d be able to hold him and open and close the gate – I just waited for Sue to get back. She was surprised! I think she asked, “How did that happen?” Kinda funny. I moved Octave to the coop and set him down in the hay. Sue then went into the tractor and handed me the ducks two by two and we moved them as well. For all our fears, things went incredibly smoothly. No one was hurt; not man nor beast. Now everyone is happy and warm in the large coop, if not exactly impressed with each other. In the photo above, you see exactly how close Roma and Octave have been to the other. Roma pals around with her ducks and Octave keeps company with his. They eye each other across the compound like teenagers who have a crush but don’t exactly know how to handle it. Hopefully they’ll get over their shyness and become a couple.We’ll just have to wait and see.

Second fear which was brought to naught – fear of freezing. Not us freezing, but rather the winter garden. We had so many days of snow and freezing weather that I felt sure the cabbages and the lettuce that I planted, and which were doing so very nicely, were totally frozen. One day, after the clouds had cleared, but the temps were still very cold, I went out to try to shake the remaining snow off of the garden coverings, but they were frozen stiff. They were absolutely as stiff as a board and completely unmovable. That’s when I first thought that we’d lost everything. I was thinking, “Well, at least we only planted a few things this year.” Then, today, I was brave enough and it had been warm enough to uncover the garden and see what was left. Much to my delighted surprise, everything had survived. There were three little butter lettuce plants that sustained some freeze damage, but I think they’ll be able to come back from it. They were happy to have some 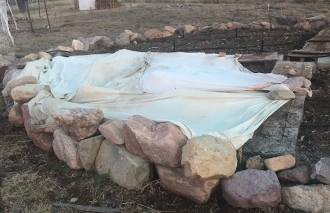 time in the sun today, then I covered them back up. I’m trying to keep the covers from weighing them down too much by utilizing the sprayers that are in there and supplementing with stacked rocks. Looks a bit funny, but I guess its working. Did I take a photo of the plants that survived? No. I took a photo after I covered everything – go figure. I covered it back up again because, even though our temperatures were nice and warm during the day, it’s still supposed to get down to the low 30’s in the early hours before dawn. Here’s hoping we can keep them alive for a few more weeks. Can’t wait to plant the whole circle garden soon – after the last chance of frost has gone. 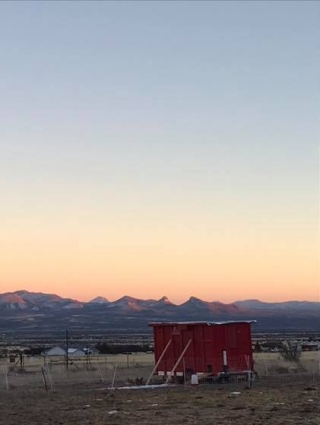 Final fear that we’re still working on – fear of the wind. We had planned to move the RCW Saturday morning. We had already put it off a week due to weather. The chickens are clearing their little piece of pasture down to nothing and they really need a new spot. When we woke up Saturday, the wind which had started blowing Friday, was still going very strong. It makes everything difficult to handle. We would have been fighting the wind when we took down the fence, fighting the wind to move the RCW, fighting the wind to put the fence back up. We didn’t want to place the trailer in a compromising position; in order to move it, we have to take down the braces on either side which give it extra stabilization in the winds. We were clocking gusts of 60 mph recently. Our fear of the wind is healthy though. Sometimes fear is there to help you make good decisions. We made the decision to not risk another tipping of the RCW, not risk injury to the birds, not risk loosing the fence in the winds, not risk harm to ourselves. We can move it another day. In the mean time, there it sits – braced against the wind.

So, what have we learned? Worry is a regular part of our lives, but we can’t let it control us or spin into a fear which we cannot overcome. Also, fear is sometimes a good thing – especially if we can see that it is based on rational thought or experience. Always good to examine worry and fear thoroughly though. Forge ahead or maybe take five first, just

depends on the situation. We’re planning to try to move the RCW on Saturday – again. If we actually make it this time, you’ll hear about it on Monday! Until then, as always~
Thanks for reading!

Egg Report: Saturday – 15 chicken. Sunday – 16 chicken. Monday – 16 chicken. Here’s hoping that the longer days bring along more eggs! We have a real need this month as we are trying to provide eggs to families in our church who are directly affected by the government shut down.
If you’re reading this and, by chance, would like to help – they are in need of grocery gift cards, gas cards, pellets for heating, and monetary donations to help with utilities and rent. I’m sure that there are people close to you that are affected as well, and they will be needing the same type of support. Message me if you have a heart to help out here. Thanks.