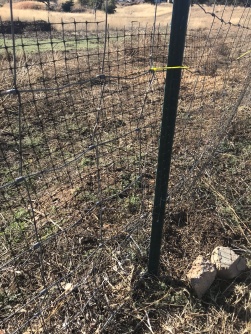 One of our long term goals is to give the oldies more free run of the “yard”. That area right around the house that is fenced in. Yes, it’s fenced in, but the fencing is 4×4 wire, which is fine for dogs, but the chickens could get through it if they tried hard enough. Before we start introducing them to a larger area, Sue has been adding this smaller squared pvc fencing to the original fence. We use is a lot when we first let littles outside of the brooder in a small outside area. It holds up really well, and it doesn’t look bad either. As a matter of fact, I had to do the close-up shot because it virtually disappears when you get a few feet away. In the next couple of days we’ll move their existing fence so it goes across the upper north west corner of the property, giving them a large triangle of open space to roam. They should like it. If they handle that well, we’ll make it bigger and bigger. Then, maybe by grasshopper season, they can be completely free! That would be amazing. 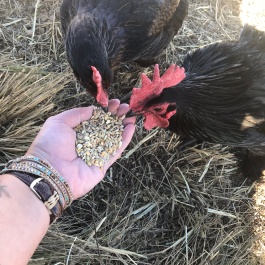 As you know, Wednesday is a short post day as we’ll be leaving soon for choir rehearsal. Just wanted to share one more photo from today with you. Been spending a bit of time making friends with Vicente (on the right) and his ladies out by the Goat Boys. Before we added all the new lady banties to Vicente’s flock, he used to come to us to be picked up and petted. Then, after his flock grew so much, he decided he didn’t need to be held any longer. He wasn’t even interested in eating from our hands or anything. Now that his excitement has abated some, I’ve been able to entice them to eat from my hand again. The little banty ladies aren’t quite sure they want to be a part of that, but they get closer every time I try. Just kinda fun.

No big plans for the rest of the week. We’ll just be playing it by ear. I’ll try to have something interesting to share with you Friday evening. Until then, as always~
Thanks for reading!

Today’s Weather: Rather overcast today, and somewhat warmer. Yesterday it was 76° when I got home around 2:30; today the high was 64°. Supposed to rain tomorrow afternoon. I hope we don’t have huge winds before that happens. I’m already done with the wind for this season. Currently, at 5:14 p.m., it is 60° and 42% humidity with a 10% chance of rain. Sunrise today was at 7:19 and sunset will be at 5:33.

Egg Report: Tuesday – 16 chicken.  Wednesday – 20 chicken. If we don’t get too much colder again, our numbers may start to pick up!