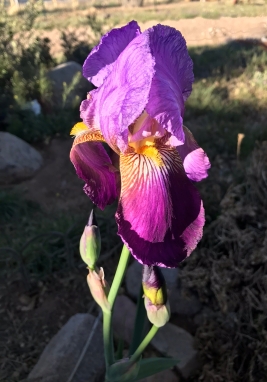 We’ve been doing quite a few posts on Spring and how it’s sprung up all over around here. Guess what? We’re going to do another one today! We have something interesting going on with one of the ducks that we want to share and we have more flowers blooming. This photo is of one of the iris I brought with me from California. It is the first time it’s bloomed since we’ve been here. I think it finally bloomed this year because we had a nice wet winter. We’ll also talk a bit about what went on over the weekend, and the current project Sue’s working on. Ready? 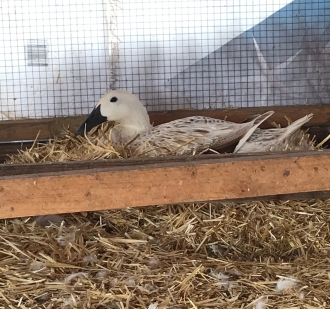 Spring always makes me thing of baby animals. The feed stores are all selling little chicks right now, calves are out in the fields all around us, and one of our ducks is sitting on eggs! I guess since we separated the two different duck flocks, this hen has felt secure enough to nest. She is one of Mandrake’s hens, from our first flock of ducks. She has made herself quite a nice little nest there. She goes out twice a day to eat and drink; carefully covering the eggs with straw before she leaves them. We’re not exactly sure when she first began to sit, but we think we might have ducklings sometime around Easter – that would be fun. We’re not sure how fertile her eggs are or how many she is sitting, but we know she was hiding them from us for a while. That’ll be an interesting development. 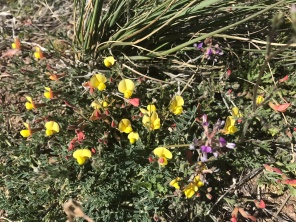 This weekend, on Saturday morning, Sue mowed and mowed and mowed. It sure looks beautiful out there now. We cleaned up and packed a million eggs – ok, not quite a million, but hundreds and hundreds; ok, around 370 eggs if you want a more exact number. We took Tom the Baker 20 dozen eggs alone. That was our goal for him, now he’s sorry he asked for that many, I think. We’ll be taking them each Saturday for a while now. He’s afraid that he 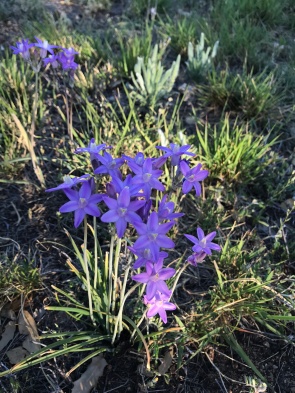 won’t be able to store them all. We might end up taking some to the little organic market in Bisbee after all. After our trip to Bisbee, we headed out the Jem’s Feed and picked up some straw bales to add to the Pond Banties’ enclosure; the bales that were there had been through quite a winter and were beginning to fall apart. We exchanged three old bales for some new ones. The chickens are still having fun going through the old straw. Saturday afternoon we had a really nice rain. It gave all the wild flowers an extra boost and they are still coming up all over the place. It’s so pretty. I have no idea what those little yellow and peach flowers are pictured above; they are no bigger than the nail on a little girl’s pinky finger, but they are all over the place. And I truly love the 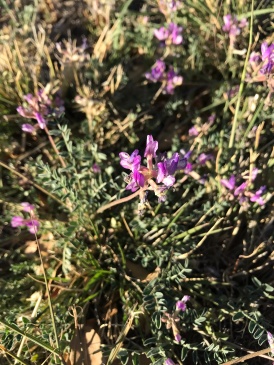 purple flowers above and to the right, I think my mom used to call those blue eyed grass… but they may have been a bit different. We also have clover coming up everywhere – which is extremely good for the soil. The bees simply adore it! So glad we have something for them to be gathering this year. Last year it warmed up so early they were gathering up chicken feed dust instead of pollen. By late afternoon on Saturday the rain clouds were completely gone and it had warmed up quite well. Sunday we started our warming trend and we ended the day by watering all the potted plants and the gabion garden. We’re getting hot! That means we’ll need to begin hand watering on a regular basis. Along with the pretty wildflowers, comes those that we don’t like so much and label “weeds”. Mustard and thistle are the most prevalent. We’ve been pulling them off and on for a while now and giving them to the ducks and chickens. We can make piles and piles and then turn around to look at where we were and it doesn’t look like we’ve done anything at all. So discouraging. We’ll just have to keep at it. 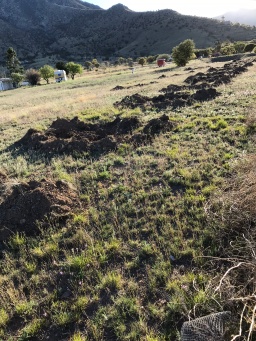 Today, Sue began to tackle the next large planting project. We have quite a few trees to plant that we want to use for wind breaks. We’ve plotted them out already and Sue had dug preliminary holes a while back, but today she spent most of her time with the back hoe making some serious headway. At first she was thinking of just making a trench for them all, since most trees that grow well around here are actually in a trench that captures the water – but because the tree line goes down hill, she was afraid that it might accidentally make a river and wash things away during the monsoon season. So instead, each tree will have it’s own personal pond. Rather like how we’ve done the orchard. Now we just need to have a planting party!  If that happens, we’ll be sure to document it for you 🙂  Until then, as always~
Thanks for reading!

Today’s Weather: When I got home today, around 4pm, it was 96° on the sunny side of the house; my car thermometer was report 88°. Currently at 7:53 p.m., it is 71°, with 17% humidity and totally clear skies.  Our overnight low is going to be a warm 49°. Looks like we’re going to have some wind tomorrow, starting in the later afternoon. The sunrise this morning was at 5:58 and the sunset was a 6:44.  Chickens are going to bed later and later! Pretty soon, I won’t be making choir practice!