Sometimes it just never stops! Ever have those days, when you think you’ve taken care of an issue and it just keeps cropping back up. It might not look exactly the same, but – in essence – same issue. We had some of that today.  Then we had a little bit of a new take on the issue. AND we had a pretty silly thing happen. I’ve gotten a pretty late start, so this will be a really quick post.

We had exactly one day with out a snake in the dove enclosure. I’m sure that rattler had been on Trip Advisor and gave the Dove’s restaurant an amazing review, because today had, what I think was, a striped whipsnake visiting. He seemed to have forgotten exactly how he got in, but was truly ready to leave, so Sue propped the door open enough for him to leave, but the doves couldn’t get out, and eventually he took his leave. The doves seemed more upset about this guy being in there that they were with the rattler. I think because Mr. Whipsnake was a lot more mobile than the rattler ever seemed to be. Poor little doves. 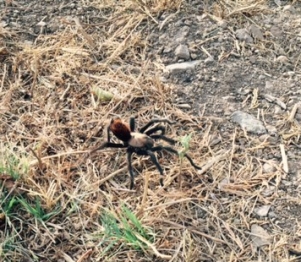 The next issue, similar but not exactly the same, was a tarantula in with the meat birds. He certainly wasn’t going to hurt them, we don’t know what he was after, but we didn’t want anyone to irritate anyone else. Looks like he was a red rumped Mexican tarantula. Wasn’t out to hurt anyone, just needed to spend some time with his chicken friends.

Final fun little thing… Sue opened up the littles chicken tractor today, so they could get out and wander. First day of Freedom! But, one little 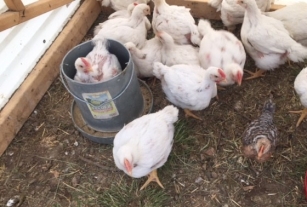 chicken had found itself stuck in the cookie jar. She had jumped into the middle of the feeder and then discovered that she couldn’t get out. Sue had to lift her out – barely enough room to get hands in there to do that. They are not the brightest little bulbs. She looks like she’s thinking, “I’m not sure how this happened.”  Oh well, remember to always check the clearance prior to jumping into the cookie jar. Hey that’s it for tonight! Until then next time, as always~
Thanks for reading!