Hello. I hope your Christmas was wonderful. We started out with breakfast with Sue’s Son’s family. Got some cute photos of Irie opening presents. I didn’t blog on Thursday because I was studying for a final on Friday (which I passed, FYI). We’ve had some cold, cold days. Yesterday we had snow, which was beautiful coming down in the morning. Our first inkling was when SweetPea, the German Shepherd, came back in with snowflakes all over her back. It was still quite dark and we couldn’t see past the porch. As it began to lighten, it was obvious it had been snowing for some time. 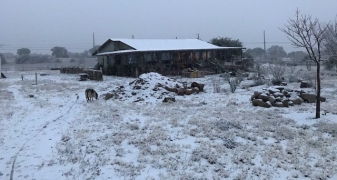 When it was finally light enough for us to go out to do chores, I headed out to the field, turned around to look back at the house and it just looked so cozy with its covering of snow, I had to take a quick photo. The lights didn’t show up much in the photo, but they are glowing softly and the Christmas tree could just barely

be seen in the large picture window to the left. It was still snowing quite heavily at this time, probably around 7:15 a.m.  I put my phone away and headed over to the RCW. I was pushing a wheelbarrow with some feed in it, that kept getting bogged down with snow. It was a heavy wet snow and stuck to the wheel and my boots. Made it out to the RCW and took a bag of feed over the fence, spread some of the grain around, under the coop where it hadn’t quite snowed and mostly inside the coop. I opened up the ramp and only two brave chickens came out. Oh well. They had food and water close at hand, so they’d be ok. I stepped back over the fence and turned around to catch this quick snap.

The goat boys don’t particularly care for snow. They were watching  me from the doorway of their little house. I gave them their pellets and their alfalfa inside where they could be out of the elements and the food wouldn’t get wet. Vicente and his girls weren’t all that happy about the snow either, but at least they have the lean-to all tho themselves. Everyone was going to be just fine for the day. It was supposed to melt by the afternoon anyway. Here’s the view through the newest layer of goat fencing. See why the goats were none too happy. I think it may have been two inches of snow at that point.

Sue was done with everything when I got back over. We couldn’t change any water because the hoses were all frozen… so we headed back in. By then, it had begun snowing again in earnest. I looked across the field to see if any chickens were out at the RCW… decided to catch another shot. It was my final one of the day. I headed up to Tucson not too much later. The snow had left, at least, a dusting all the way to the I10. Then the storm turned to rain. Sue sent me a note around noon that said the snow was melting swiftly. By the time I got back home at 5:30 p.m., the snow was all but gone. Today, we’ve had snow “showers” off and on all day. We hadn’t ever heard that term, “snow showers,” before. But we sure have had our share today. Nothing is sticking… we’re just about 500′ below the snow level. We’ll be extra cold again tonight, about 19° according to my phone. We’ll see how low we get.

That’s the report for today. Long weather report, I guess. If I don’t get back in touch, I hope that you all have a happy and safe New Year’s Eve and Day. The next time I post, I hope to be using a bit of new technology. I won’t get into that now, might not work for me immediately, but you’ll know it when you see it! Until then, as always~
Thanks for reading!