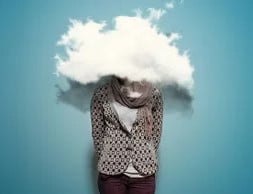 More than the usual, I am muzzy headed these last few days. Brain fog, some call it. It’s difficult for me to get a clear thought in my head. This often happens when I’ve been traveling, but I’ve been home for two sleeps now and I’m still very much muzzy headed.

Of course, while I was off visiting friends and family, Sue continued to work back here at home. She was even emailing me photos, but I never thought to check my e-mail while I was out. Just got through sifting through 600+ e-mails and found some gems from her. So why don’t I just share those tonight and tell you what you’re looking at.

So, for this first one, I had asked her to send me shots of the Almond branches if they flowered. She did. I remembered to ask her to keep them watered, which she did perfectly, but I should have thought to have her change the water and snip of the ends to keep them fresh – which I didn’t. So, they started to bloom – as you can see – but by the time I got home, the water was horrible (smelled like rotten eggs when I changed it) and the ends of the branches and kind of rotted over. We changed the water and cut off the yucky ends to show a nice healthy green inside, so maybe they will continue to bloom out.

Sue took this very artsy photo of the large coop after she added a ton of new straw. She called it “Straw Dust”, kinda like “Star Dust,” but earthier. I really like it. I might do a bit of photo shopping of that one for the art wall. No, we really don’t have an art wall, but I have aspirations. 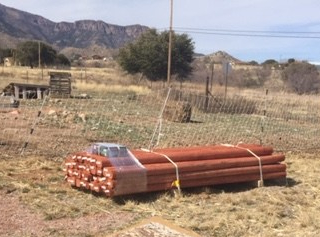 Sue is intending to put in abreviated french drains around the coop and the short run (which will eventually be enclosed) to help cut down on the erosion around the footings. She had 3 tons of gravel delivered and also ordered wooden beams (kind of like railroad ties) to help keep the gravel in place. They arrived shortly after the gravel. Our friend, Ron, helped her move them inside the coop fencing while I was gone. This is a photo right after delivery and prior to Ron’s help. Sue also purchased hugely long nails/stakes to hold the wood in place. Otherwise, those chickens would have everything moved in a matter of weeks. Dang chickens. 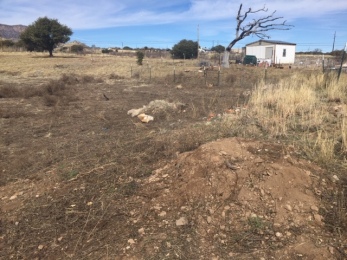 She also spent a great deal of time clearing weeds from the fences. During the windy times, the tumbleweeds blow and accumulate in specific corners of the property. They are horribly thorny and its one of those things you just hate to take care of. Generally, we place them on the outside of the fence and eventually they blow away back onto the range land from whence they came. We also grow enough of our own. this photo shows the fence line, by the newly planted Christmas tree, that she cleared of all the dried and dead weeds. The yellow grass in the distance to the left is where the Chestnut Tree orchard is.

Finally, we have two fun photos to share. The first one is of Gulliver the rooster guarding his Lilliputian friends the Banty Hens. We’re not really sure why he feels so comfortable around the Banties, and they around his hugeness – but they definitely are friends. Like many of our large roosters, he is very gentle and calm. We think he likes them because it was little Maeve who we paired him with after all his meat-bird friends went to market. They are his tribe; no matter their size.  He is the big guy in the middle, and the little ones around him are not lying down, they are

standing there with him. Just sayin’.  This other photo is a shot we caught today. We have this one white chicken that thinks she is a goose. Honestly. She is always with the geese, although we’ve not yet seen her get in the pools. She even waits to go in at night until they all are herded in. She eats with them and follows them around, even lays in the sun with them. She is one silly little chick-goose.. They do say that birds of a feather flock together.

There you have it. My muzzy headed update. Hope something in it made you smile 🙂  Saturday we’re supposed to have some stormy weather, so not sure what we’ll have going on. Until then, as always~
Thanks for reading!

Today’s Weather: Just beautiful! Some wind picking up now, but it was only slightly breezy and 80° when we went out to do the chores around 2:30 p.m.

Egg report: Let me just give you today’s because it’s getting late (thus the abbreviated weather report). Today we had 25 chicken and 3 duck. Continues to slowly, slowly edge upwards. This week, we were able to fulfill everyone’s egg wishes – no one had to wait and see. That’s a good feeling.