We’re having an erosion problem around the coop; aided by chickens, there is no doubt, but mostly due to rainwater running off the roof of the coop. It’s definitely not a drainage issue, for which one would normally use a french drain. So, perhaps we should call them modified french drains.

OK, look. I honestly did not know that was a thing. Modified French Drains are a thing! I went to look for some silly image for “modified french” (I was thinking baguette) and the first thing that popped up was the definition! And it is how we’re using it.  “Areas filled with stone that are designed to intercept and temporarily store storm water runoff until it infiltrates into the soil. MFDs can provide significant reductions in storm water runoff and pollutant loads.”  That’s perfect. Now for some photos. 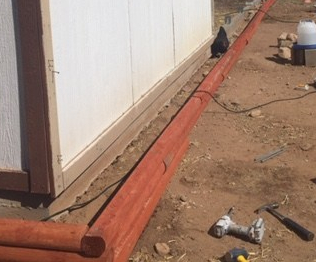 This is a photo Sue sent to me of the work in progress. I want to call your attention to the building’s foundation. If you look closely, you can see the amount of erosion I’m talking about. If it continues, and with the continued help of the chickens – and other critters like mice and gophers, the coop will be

undermined in no time flat. How are the chickens assisting in this destructive process? They like to scratch around along the edges of the footings and pick at bugs and stuff there. They do it all around the coop run too. Now that there isn’t that much space available to them on the outside, they’ve taken to the inside as well. Dang chickens. Here’s my proof. Caught this little Buff Orpington red handed today – she didn’t care at all. Just having fun in her own little chicken world. Ah well, chicken is as chicken does. 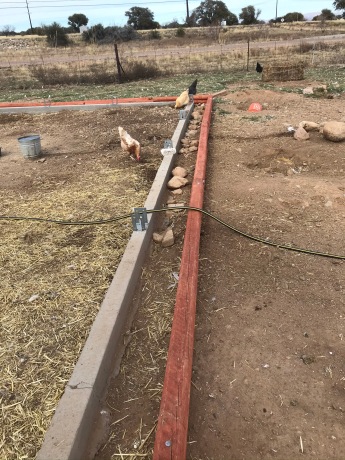 Sue is having my previous administrative assistant’s nephew help her out on this stuff. He usually does fine carpentry and repairs, but he was willing to help out with some big stuff that she can’t do on her own and that I’m never around for these days. They’ve already gotten the board put up all around the coop and the “run”. They will line the inside with some heavy gardeners cloth that drains well and then he will move that 3 tons of rock she had delivered the other day and put it all inside these trenches. After this project has been completed. Then he will begin construction on the covered run portion… that will be neat to have that all done. Making progress on so many different levels.

Alright, I know this is only a quick update – but I have been working on the computer all the live long day today and my eyes are just done. I will keep you posted as things progress on all fronts. Until then, as always~
Thanks for reading!