Been awhile. You have any news? We do have news. But let me being by saying, I have no idea what day of “quarantine” it is, how long we’ve been in this situation, nor how long it will be until we get out of it; however, we are doing our best to get through it all one day at a time.

Sue gets through it by doggedly working on projects, those ongoing and those further on down the list. As of late, she’s been working on a new chicken tractor that will be only used by the meat birds. The tractor we used last year is currently in use by the RCW flock. They are in a large run right now, so using the old tractor gives them somewhere to escape to in a pinch – you know, when hawks fly over and stuff. Anyway, Sue started working on the new tractor while i was away and now she is almost done. She’s changed up the design a bit. Always trying out new things, finding the better design. This is where she is at the moment. She’s working on it over at the Dinky House because that’s where they will finish growing up. We like to keep them under the shade of the Apple Tree and the Walnut Tree. These are the hottest little birds ever, and we try to keep them as cool as possible. Meanwhile, the first batch of meat birds are growing by leaps and bounds. Good think Sue will be done in a couple of days.

While I was away, Ron (now known as TechRon, because he knows all the Tech) finished up the solar lights in the Garage. They work so great!!! Thanks TechRon!!! Look at them glow! It’s really nice to be able to turn on the lights in the evening and be able to see any threat that may have been lurking in the shadows.

I on the other hand, have been passing the time cooking. Maybe not the best of past-times, but at least so far my experiments have been tasty. This weekend was a very baking weekend. What started out as a simple Buttermilk Biscuits for Breakfast morning, turned into Russian Ricotta bread, cinnamon rolls,  and banana muffins. Oops. Then we had to have Shrimp and Asparagus Fettuccine Alfredo tonight for dinner – because I found Daiya Alfredo Sauce while shopping for mom last week. Non-dairy, non-soy based sauce… really, really good. 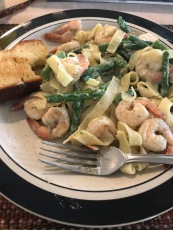 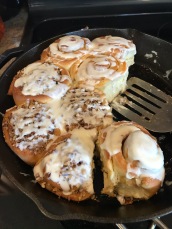 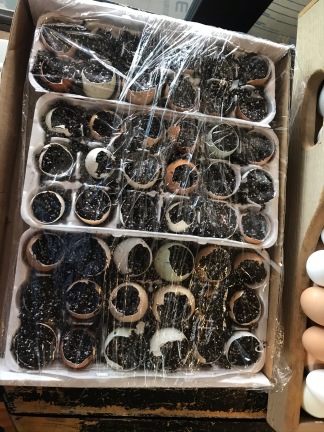 Oh, I did put some vegetable seeds up to start for the garden. We used egg shells, that way, when they’re ready to do into the ground, all we’ll need to do is crack the shell and put it all into the ground. Now the trick is just to remember to keep them watered until they sprout. We should see something in five to seven days. This is how the garden looks today. The plastic wrap is there to help keep some of the moisture in. You know, like a temporary green house. I’m just afraid there might not be enough light be the window. Although we did sprout oats in the window earlier in the year. We’ll just have to see.

You know, we’ll keep you posted on all the projects – eventually. Until then, I hope you all had a great Mother’s Day and, as always,
Thanks for reading!