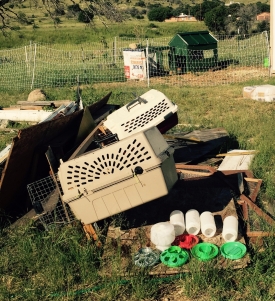 A lot went on here while I was out in California for my Dad’s birthday. You know, Sue just never stops! She’s been working on adding some improvements to the brooding table and doing last minute clean ups, etc. When ever we’ve had chickens in quarantine – regardless of the reason – when they’re out (or gone) we like to make sure everything is cleaned really well, with a bleach solution, just in case. Especially if we’re going to using some of it for littles that should be arriving tomorrow! This is the batch of stuff that Sue cleaned up on Monday, while I was driving back. 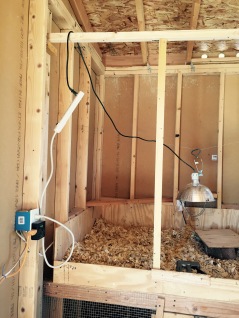 Today she put up a frame in the brooder section that she’ll add chicken wire to one side. We had an issue the last time when we raised the Grey’s; they started wanting to jump out at quite an early age. We were trying to keep them in with some discarded screens that we found in the garden shed. It worked, but it was quite a pain to undo them each time. It became more difficult when they started roosting on top of the screens. So Sue came up with the idea to permanently screen in one side and make a frame-like area that will keep a screen in place, but have it still be easily removable. So that’s what you’re seeing here – in process. I think it’ll be so much easier to take care of them this way, and they’ll be less likely to escape! 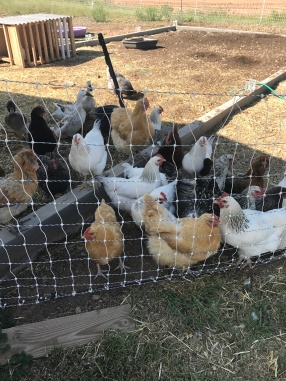 I’m putting this photo in here just to prove that they missed me! I took this today just before I gave them their scratch. I don’t want you to really be fooled, they came running for the scratch – they could care less who actually gives it to them. The little pail that I have the scratch in is just out of frame in the front. When I came out from the other side, they were actually stretching their necks through the fence. It’s currently only running at half power, so they weren’t getting shocked. They sure knew what was coming to them though! Who says chickens are dumb?  Tomorrow I’m sure we’ll have lots of cute photos of the babies in their new habitat. We’ll be sure to share them with you.  Until then, as always~
Thanks for reading!

Egg Report: Today I picked up 14 eggs, but I bet we have 6 more in there. Two of the Sisters were in the nesting boxes and they do not like to be disturbed when they are laying. There was also one Easter Egger in there. So I’ll check in a bit and let you know. OK – only four extra, but that brings the total up to 18 chicken eggs and 3 duck eggs for today. One of the days that I was gone we actually had another goose egg… so that’s three all together from Miss Roma!