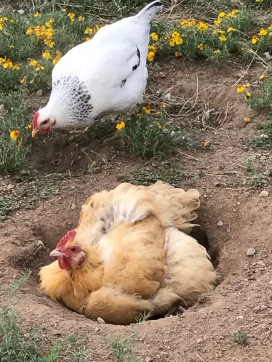 Dusting is a natural activity for chickens. In fact, it is necessary for their health! Our chickens seem to enjoy this activity greatly. They enjoy it so much that they have set aside a whole section of the coop just for this activity. They have dusting holes that can swallow up the smaller chickens, like Maeve, and we can barely see them! Sometimes when we go out there, a chicken will be almost upside down in the hole and for a second we think, “Oh no! She’s dead!” But – no far – that has never been the case. They really get down and dirt in their little dusting holes. The photo on the right shows one of the buffs in the dust hole and another waiting. What you can’t see are the other three or four holes to the right. They just pick a good place and turn it into the communal bath.
But why do they do this? Dusting helps prevent parasites like lice and mice from infesting the chickens’ feathers. The dust also helps to soak up excess oil which helps the feathers stay fluffy. The oil soaked dust is easily shaken off, then they can preen their feathers back into nice tidy rows.  Almost all birds will do a, at least, a bit of dusting. One afternoon we came home from town and a little house sparrow was dusting right in the middle of the driveway where there is a nice patch of soft, rather sandy, dirt. Our chickens enjoy dusting in various types of dirt… some of them will even dust in the hay 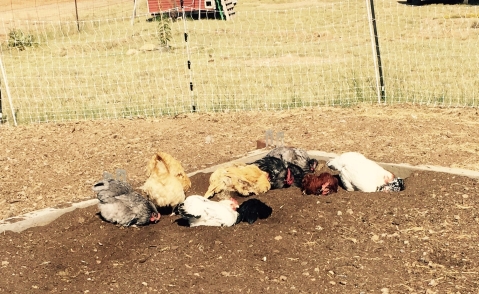 that’s on the floor of the coop… but one other very favorite place to dust is in the composted horse manure at one end of the walled chicken run. Sue caught this shot of them today, all nicely enjoy a group bath. I think it might work better when there’s more than one of them dusting; they throw the “dirt” all over each other!

I was amazed at how quickly the holes deepened in their ranging areas. They start out by just scratching up some of the dirt to make it more “dusty” I guess you could say, then they simply wallow in it, throw it around with their wings and their heads… it’s pretty funny to watch. Maybe one day we’ll get a good video to share with you. I’ve tried, but they get a little camera shy. Well, who wants to be filmed bathing? I mean, really. But, if we do, you know we’ll share it with you here! Until then, as always~
Thanks for reading!

Today’s Weather: More hot, sunny weather.  But still not as hot as it’s been in Ramona. Today we were only at 92°. My phone says that Ramona was 105°. Yikes!