We’ve had a quiet Labor Day Weekend, but we still managed to get some things completed. I just wasn’t much help to Sue this weekend as she cleaned out the large side of the chicken coop. She didn’t plan on doing the total clean like we did on the littles’ side, this was just to get some of the old out and put a new layer of clean on the top. In general, you leave an inch or two of the old so that you don’t get rid of all the beneficial enzymes and such. Usually people do it once a year, but it was getting a bit stinky in there, so wanted to change it up a bit. Instead of hauling it out, like we did the other side, Sue scattered it around the enclosure. This will help to replenish the earth around the coop and give the chickens something to rummage through for bugs during the day. Leaving the hay on the ground also encourages bugs to come into the enclosed area, thus giving the chickens a nice supply! That was the big project for Saturday.

Sunday is our Sabbath day, so aside from doing chores – and Sue play or singing at every service this Sunday – the only thing of import that was accomplished was cleaning pasty butt. Yep the new littles have it, or most of them. Only five were completely clear out of 21 little birds. They say it’s caused by the stress, but that’s kind of a catch 22. They’re stressed out because of being mailed (I mean, who wouldn’t be), and then to clean them up, you have to stress them out again. Now they’re afraid of us. I think we’ll need to start

handling them more, not just to check they’re bottoms, so that they don’t run away when we come into the room. For now, their little bottoms look quite good and we’ll just keep ahead of it – hopefully.

Today, while I watered the trees – because we haven’t had rain in, like, forever – Sue went to the Kelly’s to pick up horse manure. When she came back, she unloaded the truck into the chicken coop to help cover some more of the depleted areas in the enclosure. Oh my goodness; the chickens and the ducks had a field day. After the initial novelty wore off, 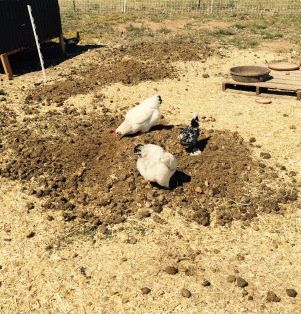 Roma decided to kept a watch on the sky from the center of the kiddie pool. (I want a little sign that says “Life Guard on Duty”.) Everyone else was just tearing through the stuff like crazy. Sue said it looked like the manure had been out for a while, it was mostly composted and had some grubs and other delectables in it. You can see how it’s in little piles in these photos? By the time we did the chores this afternoon, the hay and the manure were all mixed together quite nicely. They will continue to turn this over the days and weeks ahead, and we’ll be left with some really great amendment for their enclosures soil. Not bad!

Since I woke up feeling somewhat better this morning, and after watering the trees, shrubs, and herbs and watching the water drain under the porch from the one side flower bed, I decided to finally finish that project. So I dug up the remaining half of the bed and situated the cement edging against the porch and tried to tidy it all up a bit. Then went back and watered it. What I’d really like to do is cover it with the large mulch chips that are remaining in the depression and then plant some Johnny-Jump-Ups in there and maybe some bulbs to help hold the dirt. Wanted to do some of that today, but it took all the energy I had to complete that one small project. For now, it looks good and we can water those bushes well and deeply.

I think that about does it for this Labor Day. The only think remaining today is to put the chickens in after dusk. Well, we also might move Imen and Maeve back over to the littles side. Maeve didn’t seem interested in taking care of the babies this time, but we do have one little injured hen that is quite lonely for some company. Both Imen and Maeve get along well with the injured, and they generally hang out together, so we’re thinking of moving both of them over there tonight and give the gimpy one some company.  If we do, we’ll let you know later in the week how that turns out. Until then, as always~
Thanks for reading!

Today’s Weather: Today was really hot for us. it was 92° on the porch at about 1:30 this afternoon. It clouded over a bit while we were taking care of the chores, and we heard some thunder, but nothing came of it. We’re looking at more of the same for the next few days.

Egg Report: We’ve been having amazing egg production lately. Saturday we had 22 chicken eggs plus 5 duck eggs – one broke when a rake tine found it in the hay (Sue found some while she was cleaning out the hay – that explains the low numbers earlier.) Sunday we had 19 chicken plus the 3 duck eggs. Today we had 2 duck eggs, one is probably lost in the hay again, and 17 chicken eggs. Currently, we have 9  dozen chicken eggs ready to go to market. I’ll be taking some in to work with me tomorrow, so if you’re in the area and want some eggs… just reach out and let me know.