Ok, so I warned you that we were going to be talking about this a lot. It’s the hottest thing happening around here right now! Ron came back today (I can’t believe that he’s such a glutton for punishment, and a wonderful sport about the whole thing)- I think he might be actually having some fun. They worked really hard and accomplished a whole lot! Sue took photos throughout the whole day, so I think what I’ll do is upload them and let them speak for themselves!

1st: Added siding to the studs they had up on Tuesday 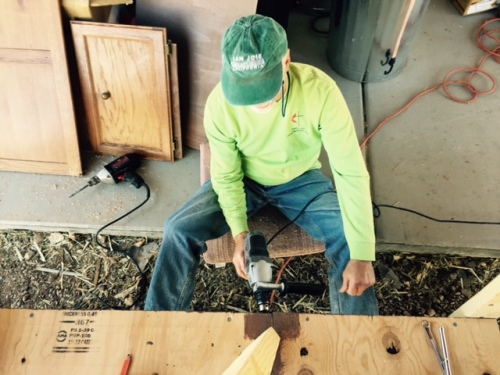 2nd: Ron, drilling pilot holes through the metal frame for the studs

(roll over the two above for their captions – don’t know why.) 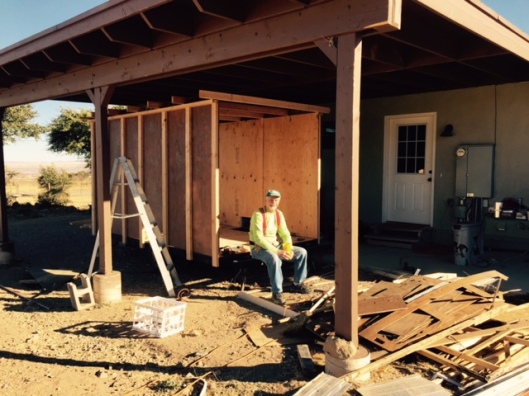 #5: Ron resting after the last thing, putting up the rafters!

They worked long and hard today so that they could get to this point. The wind had really started to pick up and they knew that those rafters had to go up before the quit, so that the walls would have stability to make it through the night. The late afternoon sun doesn’t really light this very well, so you can’t make out the 2×4’s with air vents cut into them this will give the coop the much needed ventilation for air circulation – makes for a healthy coop environment. We thank Ron and Kathy (standing behind Sue, while she takes the photos) for all of their great help and knowledge!  We’ll keep the updates coming.  Speaking of updates…

Sue didn’t end up butchering Thursday morning. It’s just too difficult for one person to take care of all by themselves. So, she did put down the few birds that we had on the DL, they just were not getting any better, and were not going to be able to make any type of recovery. That’s the most difficult part of all of this. Then, as you care for them, you grow more attached… but if they aren’t having a full, healthy, happy, life, then they shouldn’t be allowed to suffer through. We will dispatch roosters soon and add them to our freezer. They aren’t for sale because these are little Banties. They might be almost as big as a cornish hen, but probably not with as much meat. We’ll use them in stews or all day cookers like Coq au Vin or something similar. We just have too many and the mood in the coop is “agitated,” so that’s not an environment we want to have either.  We will let you know when we are able to take care of this, we just don’t have a specific date yet. Until then, as always~
Thanks for reading!

Today’s Weather: It was warm, high of 75°, but because of the wind Sue said it was chilly most of the day in the shade. The wind has begun to pick up. The prediction for tomorrow is gusts up to 19 mph, but we’ve already had them up to 20 mph… so we’ll see where we end up. Looks like the overnight low is going to be around 45°. Chance of rain at 0%.