Today (Wednesday) I had an exciting e-mail in my in box. James Most, from the Chestnut Proliferation Project, sent me a note that our trees are one their way! They should be here Saturday or Monday. Being sent all the way from Orcas Island off of the Seattle Coast line, it may be a shock to them at first, coming from such a moist environment, but we’ll heal them in and let them get used to it here. Once they go through the monsoons, I think they’ll be ok. They are being sent via Fed-ex and I believe they’ll be little bare root saplings, like those pictured here from James’ farm. He’s been a great help to us with planning out the orchard and figuring out how far apart to plant them, how much water they’ll need – what NOT to do with them. Once they are established, they are a wonderfully drought tolerant tree.Sue has also purchased some tree sleeves to start them off in, so they don’t get burned by the wind and they’re protected from the hard freezes we sometimes have here. They can stay in the sleeves for some time, so that they can be protected, get established, and become acclimatized to our weather. Initially, we’ll have them on drip, but eventually we’re hoping to use the WaterSeer to keep them watered. It’s an adventure, and one we’re excited to get going!

The trees can take 3-5 years before they bear nuts. “What do you do with the nuts after they’ve started producing?” you may ask. Heck if I know. I do know they are always available in the stores around Christmas, because everyone wants to have “chestnuts roasting on an open fire.” I thought that they’d be hard, like other nuts, once they’re roasted, but I’ve read that they are more like roasted potatoes in texture. You can roast them along with meats or squashes, enjoy them in risotto, make them into flour and create pastas or to use as dusting for desserts, you can chop them and add them to breads and cakes, or even just candy them. With just a couple of google searches, I’ve found that that’s really just the tip of the iceberg! There are a plethora of recipes out there in cyber space, just waiting to be tried. On James’ website, he talks about a local (to him) brewery Wander Brewing that has created a chestnut beer: Nitro Chestnut Brown Beer. It’s described as “Classic English Brown Ale brewed with Patagonian grown malted barley and locally harvested chestnuts from Washington Chestnut Company [that’s James’ Company]. 5.5% ABV”. Sounds like something I’d try – to drink, not to brew. But who knows? Fun!

Another thing we’re excited about? The RCW. It’s getting closer and closer to completion. Ron has been here almost every day this week to help get it done. He is such a trooper! He let’s us take his photo and everything! Tuesday the worked on covering the wheel wells and creating small vents in there as well. Air circulation is  really important for the health of the coop, so they’ve been working diligently to provide top and bottom vents. 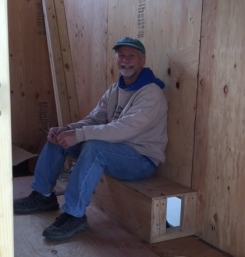 These wheel well vents are covered with welded avian wire (very small holed wire) so mice and snakes won’t be able to have access, just air (and small bugs). To the left is Ron, modeling for scale, and showing us that it also doubles as a bench. Such a chipper guy! Lookin’ good 🙂 Yesterday, Sue spent a great deal of time waterproofing the wood inside. Eventually the floor will be covered with laminate tiles. I’m pretty sure that they’re brown. Those will get covered with straw in the deep litter method, but the tiles will make the floor easier to clean when we need to do that. Today – which is Thursday now, because I didn’t get this done yesterday before choir rehearsal and it was late when we finally got home – they worked on the chicken entrance and egress. First,

they cut out little doorways – on either side of the RCW. You can see them here as, Bob (he’s the cutie-patootie in the photo) covers the door and watches for interlopers. Then they created a raise-able/lower-able chicken ramp, like a drawbridge. When it’s up it covers the doorway, keeping predators at bay. When it’s down it allows the chickens to get in and out. There’s one on each side so we can move the fence to encompass one side or the other and not have to always move the trailer to change the chicken’s grazing area. In the next photo, you can see the drawbridge in it’s closed position. I think they’re going to be working on a pieces of metal to go over the doorways as well – like a portcullis. That

way the drawbridge can stay down at night, but we can still close the chickens in and keep them safe. (I’m sure liking these fortress similes. Maybe we’ll have to call it something like, the chicken siege wagon.) Each day brings it closer and closer to the finish point. Those layers will be having their own home very soon. I believe they are planning on working more tomorrow. Sue went into town early (before band practice) to hit Home Depot for more screws as the completely ran out today, so I’m pretty sure they’re going to be working on something. I will post the next steps tomorrow afternoon. Until then, as always~
Thanks for reading!