We have four new-to-us chickens that we picked up today. Sex-links whose owner was trying to find them a less stressful home. They were raised with four Ameraucanas, but early on they had an “incident” which seems to have affected the temperament of the small flock. The owners had to use chicken “blinders” to keep them from picking on each other… it had gotten so bad that one almost died. But we think that the prolonged use of the blinders caused some stress on the chickens; they have been loosing their feathers for some time and just aren’t growing them back.  They had been receiving a wonderfully high protein diet, they had a really nice coop and attached run, they had been getting out to free range on the property several times a week, they were, and are still, laying well – but their feathers were just a horrible issue.

One of the owners is a member of the Realtor® Association I work for, so he knew me from there and knew we had chickens. He just approached me one day and asked if we would be interested in taking the Sex-Links and seeing if more free range area was what they needed. I let Sue know right away, and what the issues were, what they had done to try to treat it, all they had done with the vets to make sure they didn’t have mites or parasites, or some odd disease. We talked about where we might  put them, and how we would probably not want to intermingle them with the flock right away.  Sunday we saw them at church, I introduced Sue to them and let them talk about it. Sue asked if we could come see the chickens and the set-up… they were fine with that. 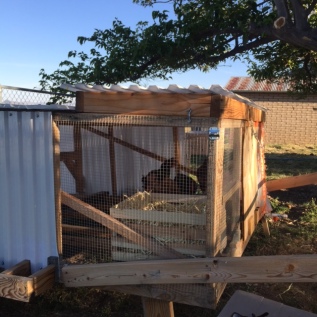 So, this afternoon we took a drive over to their neck of the Hereford woods with the intent of bringing them home, if we didn’t see anything obviously a problem, other than the no feathers thing. He had removed the blinders for us. They look perfectly healthy, if a bit on the nude side. So, we put them in to carriers and brought them home.  Sue and Dustin had taking the Chickshaw over to the dinky house and set it up in the yard under the walnut tree. This way the chickens can have a protected area to roam around in, plus their own little coop. It is sheltered a bit more than being just out in the middle of the pasture and Dustin and Alexis can have the 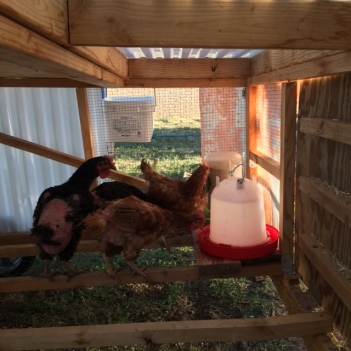 Pecksy, Goldie, Nugget, and another that we can’t remember at the moment.

eggs, as they will be taking care of them. Seems like a win-win.  For us, for Dustin and Alexis, and especially for the chickens. If they do well there, maybe we can make the chickshaw semi-permanent. They will need to stay in the chickshaw over two nights so they know that this is the place they need to come back to in the evening. Then Dustin will let them out in the yard… they may get a temporary fence while they get used to their new digs. We’re hoping that they’ll be more relaxed with just themselves to deal with, and that their feathers will grow back in no time! We’ll try to keep the owners up to date on the chickens’ progress – and you as well! Until then, as always~
Thanks for reading!

Today’s Weather: It was really warm today! At around 5pm, our thermometer said 100°… I think that it must have been measuring the heat radiating from the house – since it’s on hottest side, but I do know that it was warm today. Nice breeze was going on though, so it seemed really quite pleasant. Right now, at 8:59 p.m., it is a nice 63°. Tomorrow’s high looks to be around 88° and the overnight low 55°. Humidity is 24%; no rain on the horizon.