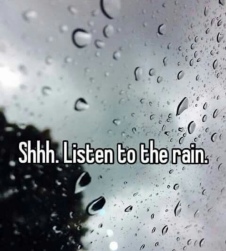 The morning didn’t start out wet, necessarily; it did rain some last night, but it wasn’t raining still. Neither Sue nor I were up for much today. Did the normal morning chore routine. Added some new things and took care of a few others. Just a rather normal Saturday morning. Too wet to move the RCW, we came in for breakfast after all the chores. Then I received a flash flood watch warning from NOAA. Yep, I’m that important that NOAA sends me text messages! We’re under flash flood watch until 3am tomorrow. That means that it has been completely cloudy and it has been wonderfully cool all day. I think we’re hitting the high right now and that is 76°! Lovely.

Before we began our rainy day watch projects, we had to give Scooby his antibiotic shot. Friday, he was still very listless, so Sue asked the vet to come and take a look at him. Dr. Sawtelle scrubbed down his leg that had been wounded from his fence-jumping-gone-terribly-wrong incident. She gave him a shot of antibiotics and then left us a bottle of it, with some needles and syringes, to continue shots: twice a day for five days. Plus she left some pain pills for him. So, we are now giving him shots – this is day 2 – once in the morning and once in the evening; and pain pills once a day in the evening, crushed and mixed in with his sweet feed. We are becoming quite the vet techs. Comes with the territory I guess. I remember that my dad was always the shot giver. Dad, where are you? Scooby was looking quite a bit better today… so guess we’re doing something right. 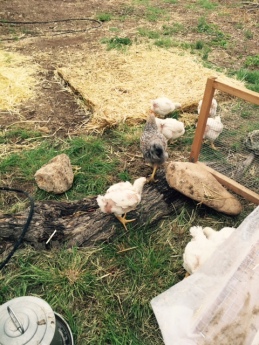 Another fun thing (no, really) for this morning was letting out the tween meat birds. We moved them the Thursday morning, I think I mentioned that, out to the little fenced area under the apple and walnut trees by the dinky house. We were extremely lucky in that the two days they needed to stay cooped up in the tractor were really nice and cool, with a sprinkling of rain here and there, but nothing too drastic. They seemed to take to their new home quite well. Today we let them them out the door. They weren’t too very sure what to do, never having been in the great outdoors before, but the rooster that grew up with the previous batch was on hand to show them what was what. I certainly didn’t get the best photo, so let me describe what you’re seeing. To the mid-right of the photo is the door of the tractor, it’s being propped open with a rock. By that rock is an 8 week old rooster. As stated, he came with the previous batch; we hoped he’d be good with these guys for the next 3-4 weeks and watch over them. He has turned into a very good protector and is helping these tweens investigate their world and stay safe. When it began raining this morning, I went out there right quick to make sure that everyone returned to the tractor (because sometimes they don’t realize that they need to do that) and the rooster had everyone gathered in and had situated himself in front of the doorway to make sure no one tried to exit. We think he’s doing an excellent job in his new role. 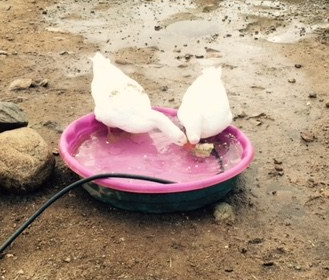 Recently, we accidentally discovered that the geese really love broccoli and cauliflower heads in their pool. We had hung some in the cages with Leggs and Wheezy to give them something to do but, after 5 days of nothing, we figured they were definitely NOT interested- so, on a lark, I just threw them into the pool last Sunday morning. I didn’t stick around to see if anyone was interested, I just thought it’d give them something to push around for a few days. That afternoon, when Sue cleaned the pool, she asked, “did you give the geese broccocli?” “Yes, did they even eat it?” “The only thing left is a two inch piece of stalk!” Guess they liked it. So, Sue has been giving them a quarter of a cauliflower head in the morning. They really go after it. Here they are, doing their best to share. By afternoon, there isn’t one little floret to be seen. Wonder if it gives them gas. 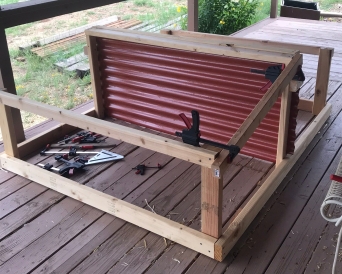 After breakfast, and having received our flash flood watch warning, the skies continued to darken. It was the perfect day for a nap, or a read, but then one feels that the day has been less than productive. I decided to work on the mending pile and began with replacing a zipper in Sue’s work vest. She decided to work on her latest chicken tractor project because she could do that under cover of the porch – plus, it was too wet to mow.  This is the project. A divided tractor, for our broody hens, or injured and rehabilitating critters. So they don’t have to be on the porch in dog kennels. This new tractor will house two – obviously – of whatever and have more room than our biggest kennel could give them, plus they can be on the ground and have dirt baths etc. It’ll be a really nice addition.

At around 11:00 it began to rain. Already told you that I went out to check the tweens, we shut the doors to the coops and it began to pour. Sue covered up my saw, which sits on the porch for ease of use, and began to shut down the project for the day. The rain was coming in onto the porch and the wind began to blow chilly. That put an end to things for her. We ended up watching a movie – I could still mend. It was a great day, just listening to the rain falling steadily on roof. I love it when we can just have the windows and doors open. Shhhhh, listen to the rain.

Hope you all have a wonderful remainder of your weekend. We’ll catch up with you on Tuesday. Until then, as always~
Thanks for reading!